The retailer finally fired Ron Johnson from the CEO post, but it may be too little, too late.

Ron Johnson didn't do J.C. Penney (JCPN.Q) investors any favors in the year and a half that he was at the helm. The company's stock has plummeted, revenue is down, and earnings per share have turned into a loss. While Johnson was touted for the work he did at Apple, clearly, his expertise in selling the hottest digital devices in the world didn't end up making him very good at selling slacks.

Last week, the company revealed that Johnson earned no bonus in 2012, and that the rest of the senior executives went home empty-handed -- well, Johnson made $1.5 million in base salary -- as well. The news of his departure shook the market, and J.C. Penney's stock plunged 11% in early trading. It might be the beginning of the end for J.C. Penney.

A series of failures
With the departure of Johnson, J.C. Penney announced the return of Mike Ullman to the post. Ullman had held the position from 2004 until Johnson was hired in 2011, getting replaced when activist investors including Bill Ackman put pressure on the board to shake things up. The belief was that Johnson would be able to bring his Apple magic to J.C. Penney, and make the stores something that people actually looked forward to visiting.

In his first few months, Johnson made sweeping changes that were seen as either brilliant or ridiculous, depending on which analyst you asked. While some programs, like the store-within-a-store concept, have caught on, others -- the banishing of coupons comes to mind -- helped dry up foot traffic. The result is a J.C. Penney that had a 32% drop in comparable sales, a drop in gross margin, and a $2.51 loss per share last quarter.

Ullman's possibilities
With all that dumped in his lap, Ullman has a lot of work to do. J.C. Penney is lagging behind just about every other company in its peer group. The chart below highlights the total investor return since Johnson took the helm -- look away if you've got a sensitive stomach. 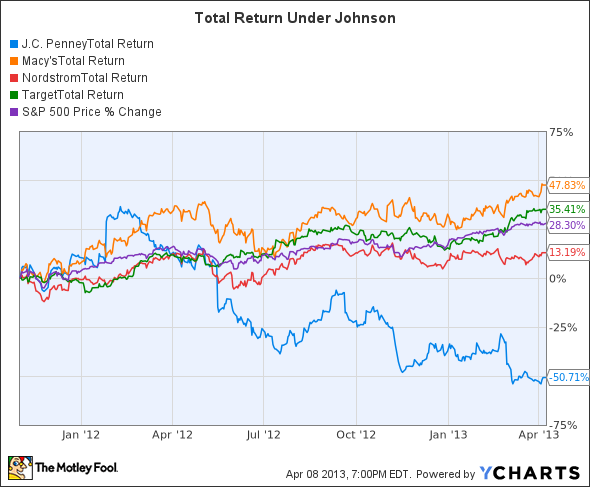 Competitors like Macy's (M 1.82%) and Target (TGT -1.81%) have been steaming ahead, with comparable sales growing 3.7% at Macy's and 2.7% at Target last year. Those companies have had the benefit of consistency and stability, which has been lacking at J.C. Penney.

Analysts are now expecting Ullman to turn the clock back. That means that, among other things, the store-within-a-store concept is probably going to disappear. That should come as a relief to customers and employees, and will hopefully be the beginning of a fresh start, instead of the beginning of the end.