Netflix stock is priced for substantial long-term growth. However, the larger its customer base becomes, the more user cancellations will impede further growth.

Netflix (NFLX 1.56%) stock has staged a strong performance since last fall, tripling in value.  Most of those gains came in the week after its most recent quarterly report: 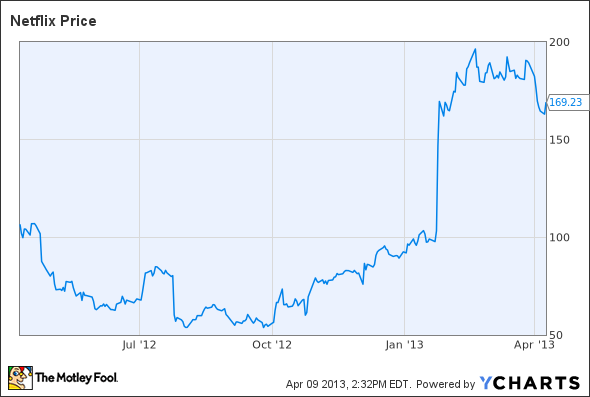 Investors were glad to see Netflix add more than 2 million domestic subscribers in the fourth quarter while also achieving record subscriber growth internationally. Yet for all of Netflix's recent successes, investors seem to be overestimating the company's ability to maintain that rate of subscriber growth.

Right now, Netflix seems to be winning back some of the customers who left after the 2011 price hike/Qwikster fiasco. However, in the next few years, I expect Netflix's high churn -- the percentage of subscribers dropping the service each month -- to become an increasingly significant drag on domestic subscriber growth. Slower growth will ultimately sink Netflix stock, simply because it is priced for massive earnings growth at 57 times forward earnings.

The importance of churn
All subscription-based businesses have to worry about churn, but the problem is particularly acute for Netflix. Analyst Michael Pachter, a longtime Netflix bear, has estimated that 58 million people have quit the service in the past 10 years -- nearly 6 million per year on average. That's more than Netflix's total worldwide subscriber base today! Furthermore, the churn rate is significantly higher now than it was previously. Management has stated that the streaming-only service has a higher churn rate than Netflix's legacy DVD-by-mail business. Moreover, churn is calculated as a percentage of total subscribers; since Netflix has a much larger subscriber base now than it did five or 10 years ago, it is also losing many more subscribers each month.

Netflix's management has tried to downplay this issue; in fact, CEO Reed Hastings has stated, "We don't focus on churn because we really want to make it easy to quit." The idea behind this strategy is that if customers have a good experience even while leaving the service, they will be more likely to come back later. Regardless, as the subscriber base grows, high churn will have a progressively stronger dampening effect on Netflix's growth. High churn probably explains why the company missed its original goal of adding 7 million domestic streaming subscribers last year, which caused Netflix stock to lose more than half its value in 2012 (before the recent run-up).

By the numbers
To get a better sense of the impact of churn, it will be helpful to look at some hypothetical numbers. Netflix no longer reports churn statistics, but the monthly churn rate was 3.7% in fourth quarter 2010, rising to 3.9% in first quarter 2011 and 4.2% in second quarter 2011. Furthermore, in last year's first-quarter letter to stockholders, Netflix used a 5% churn rate in several illustrative examples. I will therefore assume that 5% is a good ballpark figure for Netflix's monthly churn rate in the domestic streaming business.

If 5% of domestic streaming subscribers are leaving every month, that means the service has to replace 1.36 million departing members every month just to stay in place! If Netflix's subscriber base grows to 40 million and churn remains steady, the company would need to add 2 million subscribers a month to stand still. Stated another way, growing the domestic subscriber base by 5 million this year seems fairly manageable for Netflix until you realize that the company actually needs to sign up at least 20 million new (or returning) subscribers to hit that target.

Foolish conclusion
The current lofty Netflix stock price implies a level of long-term growth that seems far-fetched to me in light of the service's high churn rate. While improving the quality of content may have some positive impact on churn, much of this will be offset by rising competition from Amazon, Hulu, and even Redbox Instant (a new joint venture between Coinstar and Verizon). Even if Netflix has the best streaming video service, it will still see a steady stream of members leaving to try other services that might (or might not) provide better value.

Netflix stockholders need to understand that the more Netflix grows, the harder it will be to keep growing. With a larger subscriber base, more people will be quitting each month, while there will be a smaller pool of nonsubscribers from which to replace them. In fact, Netflix's domestic subscriber growth peaked in 2011, and has already dropped from a peak rate of 9.6 million domestic subscriber additions per yearto 5.5 million net additions in 2012.

As growth rates continue to moderate over the next few years, I expect Netflix stock to undergo radical multiple contraction. While it's hard to say just how low Netflix could go, a replica of the 2011 and 2012 crashes is very plausible. Do you think I'm wrong? Sound off in the comments box below!