When IBM makes a big move, the actions of every other Dow stock count for nearly nothing. Today is one of those days thanks, to Big Blue scoring a key analyst upgrade.

IBM (IBM 2.09%) is a giant among Dow stocks. The IT hardware and services veteran accounts for 11% of the Dow Jones Industrial Average (^DJI 1.98%) index by weight, and its price swings always make a big difference to the Dow's daily value changes.

This morning, Big Blue's shares jumped as much as 1.5% on an analyst upgrade. That's enough to add 25 points to the Dow's overall value, thanks to IBM's $211 share price, and a major driver of today's bullish Dow action.

The fuel for this morning's rocket ride came from star analyst Steve Milunovich, formerly of Merrill Lynch but now a managing director at Swiss powerhouse UBS. Milunovich is the kind of rainmaker who can move even blue-chip mega caps like IBM with a stroke of his pen.

In this case, Milunovich boosted IBM from "hold" to "buy" with a $235 price target. That would be a 12% upside to Tuesday's closing prices.

He paints Big Blue as a company in transition, "well positioned" to become a leader in so-called "IT-as-a-service" cloud computing. That's a model where businesses kick their IT operations out as a stand-alone business or divisions, moving a traditional cost center into the realm of flexible and potentially profitable operations.

These IT-focused entities are often powered by advanced cloud-computing solutions and big outsourcing contracts -- two areas where IBM is both huge and growing.

Milunovich calls this a "sound strategy," and it's hard to disagree.

IBM has been heading in this direction for many years now, but the IT-as-a-service trend is primed for massive growth in the near future as the idea enters the mainstream. IBM stock has already crushed its Dow Jones peers over the last five and 10 years, and it's likely to keep on keeping on. 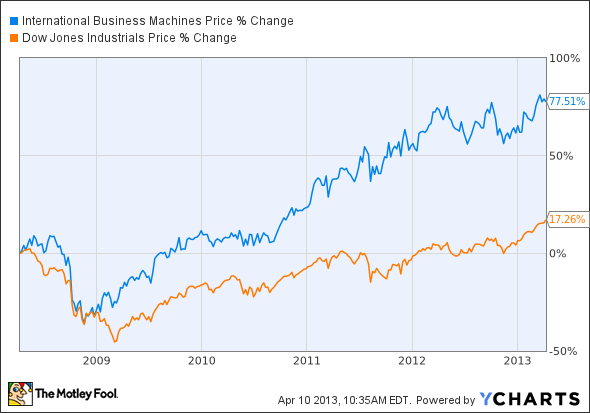 So this man among Dow stock boys looks primed for further gains. Milunovich sees a 12% return for the next year, and I believe that's an appropriate long-term growth rate for the next five years as well. In fact, I just started a long-term outperform CAPScall on IBM to underscore the comprehensive power of IBM's cloud-focused industry muscle.