Not only is this the top-rated CEO in the world, but he comes from the best-rated company to work for.

But it doesn't stop there. If we were to base investing decisions solely on what we read in these statements, that would be akin to picking a significant other based solely on their Facebook (FB 1.18%) profile -- to many, it just doesn't make sense to avoid real-life interaction.

Over the past few days, I've covered CEOs 25 through 2. Today, I'm going to introduce you to the company with the highest-rated CEO, give you some background on the business, and at the end, I'll offer access to a special premium report on the company.

Facebook
It's kind of hard to believe that just a decade ago, almost no one knew what Facebook was. At most, it was the site given to college freshmen so they knew who their classmates were. Fast-forward 10 years and it's the second-most-popular website in the world.

The fact that an idea hatched in a college dorm room over a decade ago has expanded so rapidly is somewhat mind-boggling. Take a look at the map below, and you'll see Facebook's amazing global reach. In every country highlighted, Facebook is among the top 10 most visited sites in the country. 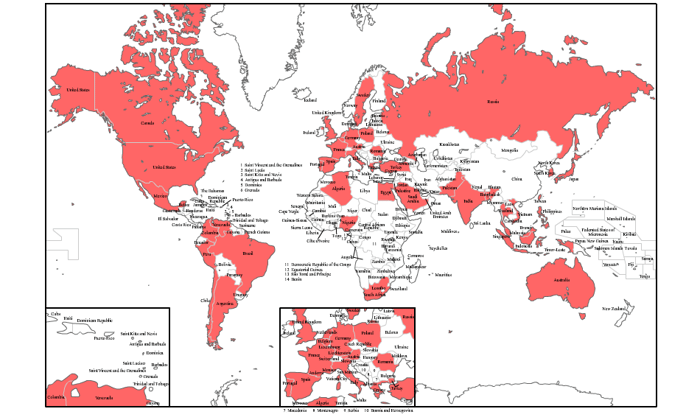 And this doesn't even begin to cover the amount of time people are spending on Facebook. A recent survey indicates that the average American visits the site almost 14 times per day, spending about 2.5 minutes on the site each time -- or 35 minutes per day.

There's a lot going right here
It's no secret who the CEO of the company is; Mark Zuckerberg's picture was on Facebook's homepage for first few years it was online. And the movie The Social Network did a lot to let people know about the beginnings of the company.

As CEO, Zuckerberg takes a very different approach to running a publicly traded company. As fellow Fool Morgan Housel has pointed out, Zuckerberg never started Facebook with the intention of making any money, and its annual report once stated its future was based on "[believing] in something beyond simply maximizing profits."

That type of stance -- believing in the bigger goal of connecting the world -- is something that motivates employees, and they take it to heart when they see their boss living those ideals. It should be no surprise, then, that Zuckerberg was not only rated as the top CEO, but that Facebook was also rated as the top place to work in 2013 -- a true coup.

The funny thing is, in the process of building out this bigger goal, Facebook has, in fact, been able to show amazing growth in both revenue and income. 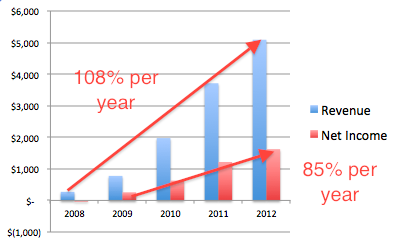 Source: SEC filings. All numbers in millions. Net income does not include share-based compensation .

And while it may be alarming that the earnings growth has been slower than the revenue growth, that's because it only includes 2009 to 2012, as the company wasn't profitable in 2008.

Obviously, there are legitimate concerns about for those who want to own shares of Facebook stock. The company relies heavily on advertising revenue, and while there are lots of eyes that see these ads, they also take away from the general Facebook experience.