NVIDIA CEO Jen-Hsun Huang acknowledges that the Tegra business may not grow this year, since the company needed to focus on its LTE capabilities. It's a necessary bet. Will it pay off?

At NVIDIA's (NVDA 3.04%) investor day yesterday, CEO Jen-Hsun Huang made a bittersweet confession. He predicted that the company's important Tegra mobile processor business wouldn't put up any growth this year. The company was faced with a tough choice, since it knew it needed a processor with integrated LTE to properly compete with Qualcomm (QCOM 1.86%) in smartphones.

Huang decided to push back the newest Tegra 4 launch by a quarter so that the company could focus on its LTE variant, the Tegra 4i that was announced in February. Previously code-named "Grey," the Tegra 4i had already been delayed from a 2012 launch, so it was imperative to get the 4i out the door.

The Tegra business is expected to be "about flat" this year, following impressive revenue growth of 29% last fiscal year to $764.4 million. NVIDIA now helpfully discloses its Tegra results, whereas they were previously included in its broader consumer products business. 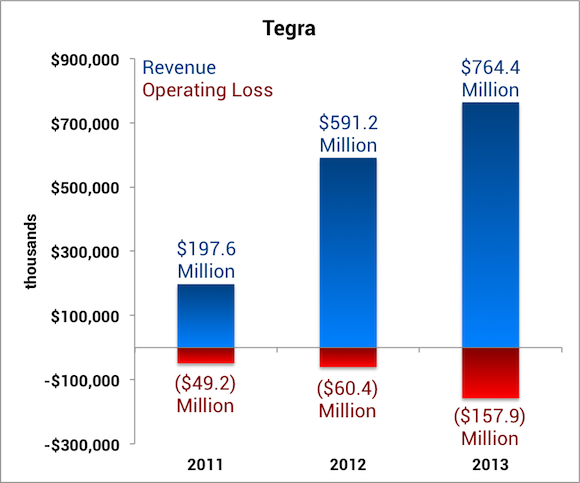 As with any young growth business, NVIDIA needs to invest heavily in research and development during the early days to ramp up, so the growing operating losses fit within that context. The real challenge for NVIDIA is to prove to investors that the Tegra investment is worth it, in the form of design wins and revenue growth. Huang acknowledges that Tegra may hit a speed bump this year, but that it's a necessary one in order to play the longer-term migration to LTE.

Huang believes that the "LTE marketplace is growing faster than any transition that has happened in wireless," which makes it a "once in a lifetime" opportunity. Sacrificing some near-term Tegra 4 wins in order to get in the integrated LTE game as soon as possible was a necessary move.

The executive's admission lends credibility to other recent reports of Qualcomm growing its already-dominant share. In February, Pacific Crest analyst Michael McConnell believes that Qualcomm had scored the win in Google's (GOOGL 4.16%) upcoming second-generation Nexus 7, which was reiterated by a Reuters report this month. Google won't say officially, but analysts estimate that the search giant shipped roughly 4.6 million units during the second half of 2012. That spot was undoubtedly one of NVIDIA's bigger tablet wins last year, and would be quite a loss of Qualcomm indeed scores the next Nexus 7.

On the smartphone front, Sterne Agee analyst Vijay Rakesh believes that Qualcomm has made a "clean sweep" with smartphone wins at all the major OEMs, including Samsung, HTC, LTE, and ZTE, which are using its Snapdragon 600 processor.

The Tegra 4i is absolutely necessary for NVIDIA to retain relevance in smartphones in the longer term, but what will it cost?