After a nice run in 2013 so far, can Pfizer's stock keep rising? Here's one potential obstacle.

Investors holding Pfizer (PFE 1.32%) stock are sitting pretty these days. Since they say that a picture is worth a thousand words, I'll let this picture explain why. 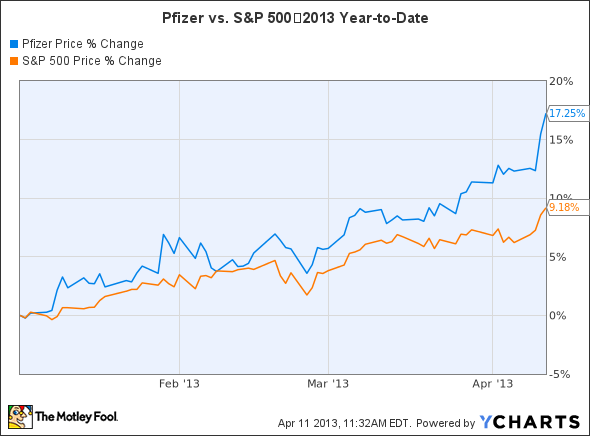 Pfizer is walloping the S&P 500, which isn't doing too badly itself. But all good things must come to an end, right? Let's look at the one thing most likely to put a halt to this stock's terrific run of late.

Checking off the list
This should be a piece of cake. Nearly all of the big pharma companies continue to face problems due to the patent cliff. Surely an expiring patent could soon derail the Pfizer stock run, right? Actually, no.

It's true that Pfizer's revenue took a substantial hit from Lipitor going off patent. However, the company doesn't face any significant drugs losing patent protection this year. The U.S. patent for arthritis drug Celebrex expires in 2014, but that's still a ways off.

Drug company stocks often get zapped by bad results from a late-stage trial. Is there a study coming up that could dent Pfizer stock? Judging from the Food and Drug Administration's calendar for the rest of the year, that answer is "no."

Shares of Johnson & Johnson (JNJ 0.42%) and Merck (MRK 0.74%) have also moved up quickly. J&J's price-to-earnings multiple is at its highest point since 2006. Merck's P/E is higher than it's been since the beginning of 2012. These higher valuations could lead to profit-taking and bring down shares. Is Pfizer also at risk? Not really.

Although Pfizer's P/E has been on the move upward, it's still actually close to its lowest levels since late 2011. And it's well below the trailing P/E values for both J&J and Merck.

Of course, that begs the question: Is there something wrong with Pfizer's stock if it's not doing as well as these peers? We have to remember that J&J isn't just a pharmaceutical company; it's also a consumer products and medical device company. Actually, its medical device business has been thriving more than any segment lately.

Merck is more akin to Pfizer. The two companies' P/E multiples tracked pretty well until this year. What happened?

Nothing to worry about. Pfizer's sale of its nutrition business generated extra earnings that brought its trailing P/E down. This doesn't undermine the argument that Pfizer is trading cheaply, though. Its forward P/E is still attractive.

Pfizer has caught some heat recently from Congress over its pricing for rheumatoid arthritis drug Xeljanz, which was developed in collaboration with the National Institutes for Health. However, I don't expect this issue to derail the stock.

Perhaps sales for newer products such as Xeljanz could prove disappointing. Again, I don't think this will be the case. Xeljanz should live up to expectations.

So should Eliquis, the blood-thinning drug developed with partner Bristol-Myers Squibb (BMY 1.70%). Pfizer and Bristol received FDA approval for the drug in December.Some analysts project that Eliquis could generate annual sales of $3 billion to $5 billion. Those numbers are music to the ears of both Pfizer and Bristol.

This has turned into more of a challenge than initially appeared. What can stop Pfizer's momentum?

The one thing
Of course, plenty of wild cards could cause Pfizer stock to drop. Unexpected product safety issues or controversies could rear up. However, the most likely roadblock ahead for the big drugmaker is one that it can't control: the economy.

Current world tensions could escalate into something serious. Unemployment could head in a negative direction. A wide variety of issues could come up that cause overall markets to fall, bringing Pfizer stock down with them.

The possibility of such macroeconomic problems appears to be the one thing most likely to get in the way of the current Pfizer stock steamroller. However, fear of what could happen can result in missing out on good things that are happening. And right now, Pfizer has a lot of good things going on.