Please ensure Javascript is enabled for purposes of website accessibility
Log In Help Join The Motley Fool
Free Article Join Over 1 Million Premium Members And Get More In-Depth Stock Guidance and Research
By Morgan Housel - Apr 15, 2013 at 9:54AM

April 15. Tax day. One of the most dreaded days in America.

If you haven't finished your taxes yet, run. They're due today.

For those who have, here are four wild facts about taxes in America.

1. Tax cheats have cost trillions of dollars over the last decade.
Every few years, the IRS provides an estimate of the "tax gap," or the difference between how much revenue it should have collected based on known business activity, and how much it actually collected. It's a rough measure of tax cheats.

In 2006, the most recent year it has data on, IRS estimates the tax gap at $385 billion, or an 85.5% compliance rate. And that's after subsequent audits brought in late payments and penalties. 2001's tax gap totaled $290 billion.

The national debt increased by $8.3 trillion from 2001 to 2011. Tax cheats, then, are indirectly responsible for more than a third of the increase in the national debt. Thanks, guys.

For perspective, consider that the federal government has spent an average of $97 billion per year on "education, training, and employment" since 2008.

Go ahead, get angry.

3. The composition has changed enormously over time
The federal government collected tax receipts equal to 15.8% of GDP in 2012. That's less than the average of 17.7% since 1945, and a touch below the 16% average of the last decade. 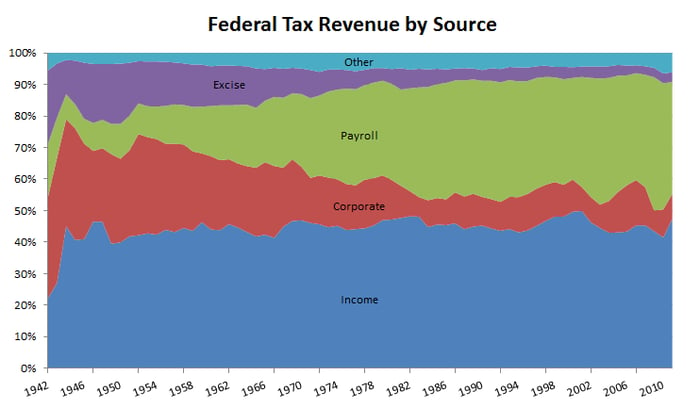 Source: Office of Budget and Management.

4. The one-man class war
In 1935, president Roosevelt set a special 79% tax rate on those earning more than $5 million a year. According to historian Mark Leff, only one man in America made that much money over the following three years: John D. Rockefeller, Jr.

Rockefeller's father, John D. Sr., wasn't happy. "When a man has accumulated a sum of money, accumulated it within the law, the Government has no right to share in its earnings," he once said, according to his biography, Titan. (Anti-trust courts, of course, questioned whether Rockefeller's wealth was made within the law.)

For more on taxes, check out: