The CEO makes the case to shareholders that big investments now should power greater profits down the line.

The head of a company valued at over $120 billion would like to remind investors that the business does have a profit motive, after all.

Amazon.com (AMZN -0.03%) CEO Jeff Bezos spent most of this year's letter to shareholders (link opens PDF file) defending the company's spiking levels of spending, and making the case that the e-tailer really does aim to generate long-term profits.

Here's a quick rundown of some of the huge new investments that have critics worried, and Bezos' response to the complaints.

Digital media splurge
Amazon is on a content shopping spree. In fierce competition against Netflix (NFLX 0.58%) over the growing streaming video market, the company has quickly tripled the size of its TV and movie library to more than 38,000 titles.

Netflix spends over $2 billion annually on securing content rights, and that appears to be the same commitment that Amazon is headed toward. Bezos sees the costs as all part of improving the customer experience. He quotes a happy Prime customer who said, "I signed up for Prime for the shipping, yet now I get movies, and TV and books. You keep adding more, but not charging more. So thanks again for the additions."

Tiny tablet margins
The tablet boom might be padding some device manufacturers' bottom lines, but not Amazon's. Apple's (AAPL 4.01%) margins have been falling as sales of the iPad Mini ramp up. Still, the Mac maker logged a hefty 38.6% gross profit last quarter. Amazon, meanwhile, prefers to "sell premium hardware at roughly breakeven prices," according to Bezos. That approach puts the pressure on content sales to deliver all the profits for the company's Kindle e-readers and Fire tablet lineups.

Services price cuts
Amazon's cloud services division, or AWS, looks like it's in the business of cutting prices. Since launching in 2007, AWS has sliced the prices it charges enterprises a whopping 27 times. And the company also added a feature that alerts customers to the fact that their configurations may be unnecessarily expensive. "Yes, we are actively telling customers they're paying us more than they need to," Bezos said.

Summing it up
The CEO sums up critics' complaints like this: "Our heavy investments in Prime, AWS, Kindle, digital media, and customer experience in general strike some as too generous, shareholder indifferent, or even at odds with being a for-profit company."

And in response, he quoted Benjamin Graham's famous saying about long-term stock gains boiling down to a company's earnings power: "In the short run, the market is a voting machine, but in the long run, it is a weighing machine."

"We want to be weighed," Bezos says, "and we're always working to build a heavier company."

Looking ahead
That heft hasn't shown up in the company's operating margin lately. Operating profits have tanked as spending ramped up. 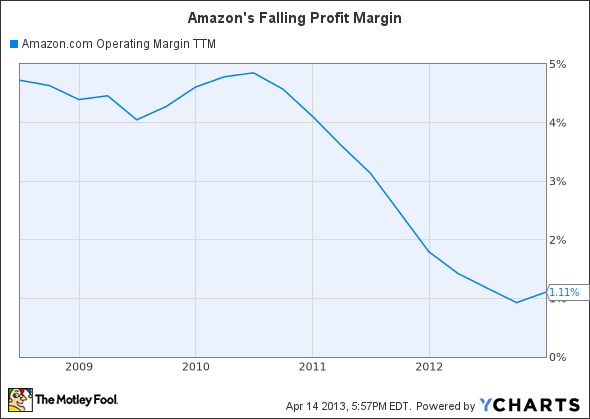 But when Amazon reports its first-quarter earnings on April 25, investors will get a crucial update on those profits, as well as a fresh chance to vote on the company's business trends.