Which Noble stock is the right one to buy?

Have you ever bought the wrong stock? I'm not referring to that stock you bought that went bust. Instead, I'm asking if you've ever meant to buy the stock of one company but because of name confusion you bought the wrong one? If you're not paying attention, its easier to do than you'd think.

Take Noble Energy (NBL) and Noble Corp (NEBLQ). If you look at the ticker symbol of each company, you can see how easy it would be to confuse the two. So before you submit that buy order, let's drill down into each company so you can see why you'd want to double check before submitting that buy order.

Noble Energy
As an oil and gas exploration and production company, Noble Energy is in the business of finding and producing oil and gas. The company operates in five core areas which it believes will deliver double-digit-growth rates for its investors over the next few years as you can see from the chart below. 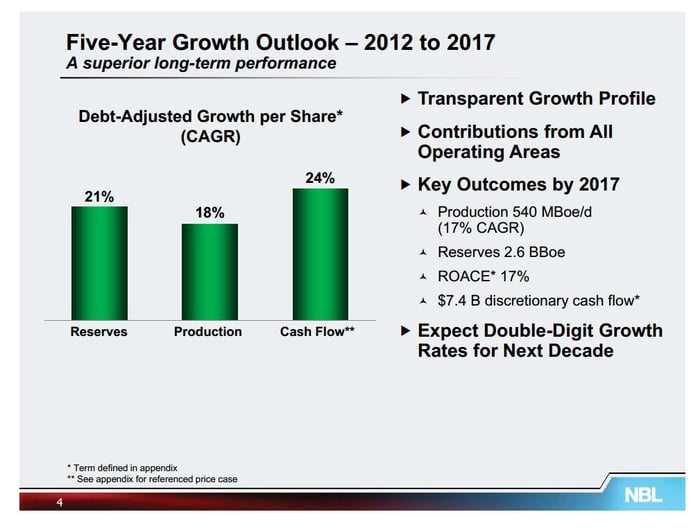 Among its operations is a joint venture with CONSOL Energy (CNX 3.89%) in the Marcellus Shale as well as two massive natural gas finds off the coast of Israel. The joint venture with CONSOL is focused on the dry gas potion of the Marcellus, but it's designed to grow production in the highest-return areas. While the company has a lot of gas production it's offset by its more oily plays in the Gulf of Mexico, West Africa, and the DJ Basin in Colorado.

I could go on, but I think you get the idea, this a company that makes money from finding and producing oil and gas. It has balanced operations that are spread across the world. These operations produce a lot of cash flow, but right now it only pays a dividend of 0.85%. Keep that number in mind as we drill down into the other Noble.

As a contract driller this company works with large international oil companies to drill for oil and gas. It has one of the largest fleets in the business, currently second only to Transocean (RIG 0.38%). Also worth noting, the company isn't as directly affected by commodity prices as the exploration and production companies that contracts with it.

Like Transocean, it's one of the handful of contract drillers that's benefiting from the boom in deepwater drilling. Last year was the best year ever for deepwater discoveries and Noble Corp is right in the sweet spot of this major growth market. The company sees solid future fundamentals as Brent crude has averaged over $100 per barrel for the past three years making deepwater drilling a very profitable venture.

The company recently announced that it's boosting its dividend and it now yields of just over 2.5%. Bottom line here, if you're looking for a contract driller and a higher dividend, then Noble Corp is the Noble stock for your portfolio.

The Foolish bottom line
Before you press send on the buy order, double check to make sure you're getting what you expect. Noble is one of the more tricky companies because the logical ticker for Noble Energy belongs to Noble Corp.