Investors are yearnings for some good news out of Redmond that could propel Microsoft shares to new highs. Could the company's earnings release on Thursday be just that catalyst? 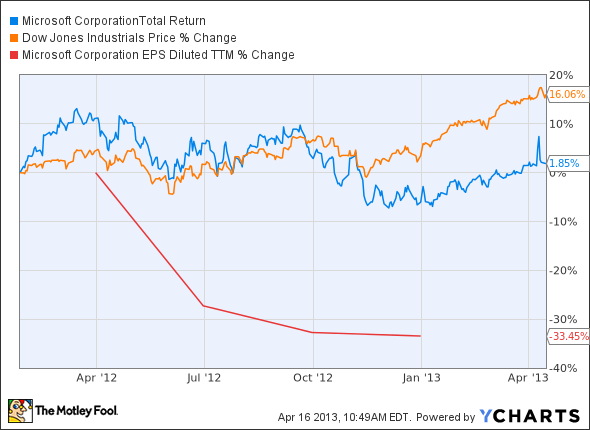 Unfortunately, most signs point to a solid "no." Gartner and IDC have reported flagging PC sales in the first calendar quarter, going so far as to pin much of the damage on the Windows 8 failure. The Nokia/Microsoft duo is battling BlackBerry for a modest third-place rank in the mobile market, claiming a vanishingly thin 3% market share today. Fellow Fool Daniel Sparks thinks the Windows Phone platform is "poised to potentially pull off a surprise," but even Dan concedes that it's not a good time to "bet big on Microsoft in the smartphone market."

Analysts do expect Microsoft to break that streak of plunging earnings: The consensus calls for a 13% increase to $0.68 in earnings per diluted share. That's no guarantee of a strong performance, though. Microsoft has been hit-and-miss on the bottom line lately, missing one of the last four earnings targets.

Wall Street analysts are split over Redmond. Goldman Sachs and Nomura downgraded the stock last week to "sell" and "hold," respectively. But Morgan Stanley just boosted Microsoft to "overweight" with a $36 price target due to an "exhaustion of negativity." Goldman's downgrade came with a surprising $37 price target -- but only if Microsoft split off its struggling online-services division. That's not a likely move, hence the "sell" rating.

Kick CEO Steve Ballmer to the curb as well, and I might join Morgan Stanley on the sunny side of the Street. Until then, I'm afraid Microsoft's long legacy and massive assets are tied to a leader without a realistic vision. This quarter is no different, and I'd be downright shocked to see a strong Microsoft report here.