A beat, combined with a refranchising announcement, has investors excited.

Something that sets us Foolish investors apart from others is that we like to be in control of our own finances. There's nothing wrong with investing in an index fund, but we like to decide which companies will guide us to a financially healthy retirement.

One very popular stock for many a retirement portfolio -- including "The World's Greatest" -- reported this morning, and investors are pleased with what they see. Read below to see why this stock -- Coca-Cola (KO 1.15%) -- is up today, and at the end, I'll offer up access to a special premium report on the company.

Source: E*TRADE, SEC filings. Does not include restructuring charges.

Many people know that Coca-Cola's brand is one of the most popular in the world. In an effort to get a better view for how the company is performing globally, its important to break down how each geographic region performed in the first quarter.

When you look at how each of these regions performed, you'll see that sales were relatively down across the board. 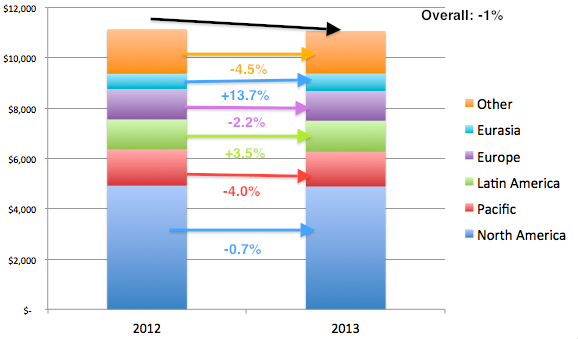 So why the big jump?
Given the fact that revenue was down pretty much across the board, one might be wondering why Coke is up more than 5% as of this writing. To that, there are two responses.

First, a company's price is usually based on expectations for how it will perform in the future. Slowing revenues were forecast and priced into the stock, so when it beat expectations for both revenue and earnings, investors drove up the price.

But the second and more interesting reason has to do with Coke's decision to refranchise its distribution network. A few years ago, Coke bought back all of these rights from its smaller bottlers. Now, it is selling those rights back, but it will be keeping its ownership stake in the actual factories as it looks to develop a uniform model across the country.

This was a decision that rival PepsiCo (PEP 0.83%) has already made, as it allows the companies to pass on overhead costs to smaller bottlers to provide distribution to stores and gas stations. No timeline was set for the move, but the market clearly thinks that the move will help Coke save money and boost earnings over time.

One notable trend that continues and is worth noting is that carbonated, sweetened beverage (soda) sales continue to trend downward in the developed world, as detrimental health benefits become clearer.