With the markets hitting new all-time highs in recent weeks, I want to point something out that is literally true: Not a single investor in today's market practicing legitimate buy and hold in a low-cost index fund has ever lost money. Not one.

That's an extraordinary statistic, isn't it?

It's even more extraordinary when you realize how few investors it applies to. Analytics firm Dalbar gathered data on how the average stock fund investor performed from 1990 to 2010, and compared it to the market index. The results are unsurprising, but thoroughly depressing: 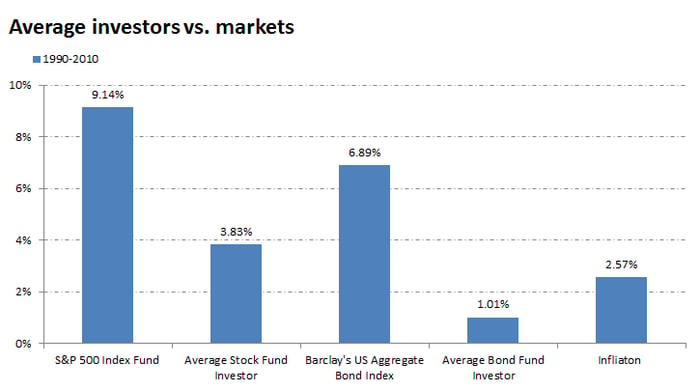 There are several reasons for this, but the big one is simple. Most investors are not long-term buy-and-holders. They lack the patience and require the thrill of something more. Either they are convinced of their ability to time the market, which usually leads to dismal returns, or they are emotional pendulums, buying at the top and selling out at the bottom of markets, which always leads to dismal returns.

Part of the reason I think so many lack the fortitude to hang on without being shaken out of the market by volatility is a lack of appreciation for how normal volatility is.

Take a look at this chart. The red line is the S&P 500 since 1928. The grey lines mark times when the index began a decline of least 20% from a recent high: 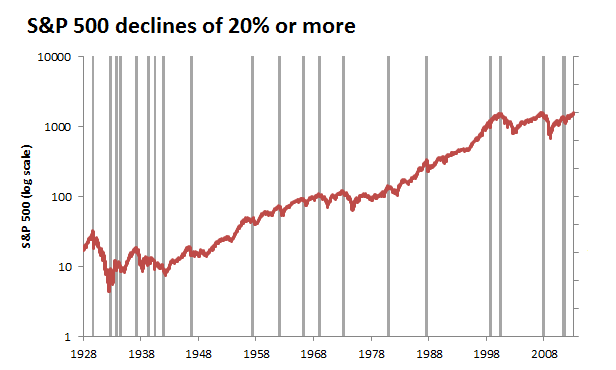 Since 1928, there are 20 periods of a 20%-or-more decline. The market increased nearly 100-fold during this period, or 140-fold with dividends and inflation factored in.

Think about that. During a period when people made 140 times their money in real terms, they saw at least one-fifth of their wealth melt away 20 times, or once every 4.5 years. Even if you limit it to the post-World War II period, big market drops occur at least once a decade.

The only real difference between buy and holders and the average investor is this:

That's honestly it. And it applies to those in low-cost index funds and stock-pickers alike. Coca-Cola (NYSE:KO) has averaged 12.5% annual returns since 1968, but lost more than 20% of its value six times during that period. If you tried to avoid the latter, you almost certainly missed the former. Berkshire Hathaway (NYSE:BRK.B) is up half a million percent since 1965, but as Charlie Munger put it in 2009: "This is the third time that Warren and I have seen our holdings in Berkshire Hathaway go down, top tick to bottom tick, by 50%." He went on:

I think it's in the nature of long term shareholding of the normal vicissitudes, in worldly outcomes, and in markets that the long-term holder has his quoted value of his stocks go down by say 50%. In fact, you can argue that if you're not willing to react with equanimity to a market price decline of 50% two or three times a century you're not fit to be a common shareholder, and you deserve the mediocre result you're going to get compared to the people who do have the temperament, who can be more philosophical about these market fluctuations.

Buy-and-holders are sometimes heckled for being too simplistic, or not astute, or ideologically worshiping a theory that, for some reason, some think has been discredited. But the scores are in: No true buy-and-holder has ever lost money; the vast majority of traders and market timers have. As Tolstoy said, "The two most powerful warriors are patience and time."