Intel investors have priced all kinds of fears into the stock already. That's how a small disappointment can sound like a sigh of relief.

Intel (INTC 3.03%) didn't have a great first quarter by any means. GAAP earnings plunged 25% year over year on 2.5% weaker sales, and gross margin is in a long, slow free fall. 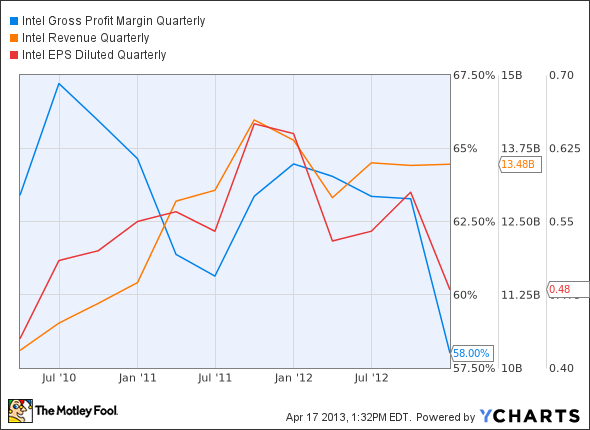 That's still not a disaster in the light of terrible PC-system sales across the industry. Shouldn't Intel have reported some kind of revenue implosion here, rather than a mild 2.5% dip?

Beating the Dow on a day like this may not win Intel any awards, but it's a small victory nonetheless.

The company saw its PC processors division deliver 6% lower sales compared with the year-ago period. But the data center segment nearly balanced out that hit by increasing its revenue by 7.5%.

That's pretty much what I expected to happen, given that Intel never warned investors of an impending meltdown. Enterprise systems are in high demand, feeding into the twin booms in mobile and cloud computing. Without powerful servers feeding data into your smartphone, the darn thing would be no more than a fancy phone, after all.

As an early barometer for reports to come, Intel's results point to good things for IBM (IBM 1.86%) on Thursday. Big Blue doesn't touch the consumer market any longer, but it should benefit from the strong server-side environment. Like Intel, IBM has suffered only moderate share-price losses today.

On the other hand, the 6% dip in PC chips spells trouble for smaller rival Advanced Micro Devices (AMD 6.58%). Investors haven't panicked yet -- AMD shares are down a relatively mild 1.2% -- but maybe they should. Keep in mind that analyst firm IDC reported 14% lower PC sales in the first quarter and consider how much smaller Intel's drop is. The difference must come out of somebody's revenue, and Intel really only competes with AMD in that sector. I'll keep a nervous eye on AMD's report later this week and a far more optimistic one on IBM's.