The dichotomy between Apple and Google has existed since the dawn of time. You may have thought it impossible for Apple to beat Google at advertising. You'd be wrong.

Apple (AAPL 2.32%) has devices with integrated hardware and software. Google (GOOGL 1.88%) has search and advertising. This dichotomy has existed since the dawn of time (this may be an exaggeration).

For the most part, the two competing titans have mostly acknowledged each other's respective strengths in their core businesses, even if they dip their toes in to compete a little from time to time. You'd normally think it impossible for Nexus devices to outsell iDevices, or Apple to beat Google in advertising. Well, you'd be partially wrong with the latter. 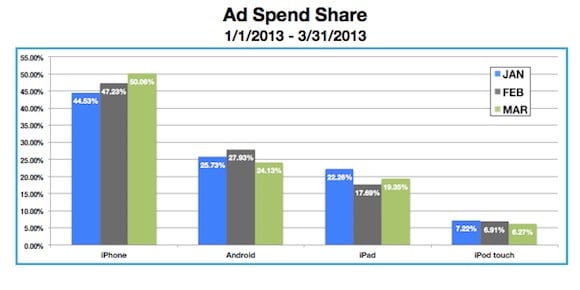 The iPhone alone gobbles up half of the market, with Android claiming a quarter. Some of Android's weakness relates to the slow uptake of Android tablets, with MoPub estimating ad spending in that segment at less than 1%.

The ad platform operator believes that iOS trumps Android in two important ways, at least as far advertisers are concerned. iOS users have been shown time and time again to have a higher propensity to spend money, which makes them more valuable to advertisers. iOS also boasts more "rich media" ads that tend to be more engaging and yield higher click-through rates.

MoPub is designed for publishers to manage ad inventory on iOS and Android, so the report doesn't necessarily represent the broader market. The figures seemingly contradict a separate report recently released by IDC on the mobile display ad market, which put Big G firmly on top, and Apple in No. 3 behind Millennial Media.

Still, MoPub's findings suggest that there are some ways in which Apple is beating Google at its own game.