The PC chip underdog has a plan in place. The rest of 2013 is all about executing it properly.

Heading into Thursday's earnings report, investors looked at warning signs from larger rival Intel (INTC -0.86%) and traded AMD down more than 6%. About an hour ahead of the scheduled release, the stock suddenly jumped 10% in a matter of minutes -- perhaps sparked by some kind of information leak, but nobody's talking.

Then, AMD beat Wall Street's earnings estimates, but it wasn't a blowout. On Friday, AMD shares sank back 4% from Thursday's overheated top, and in the end... we're back to 2% below where we started on Monday. 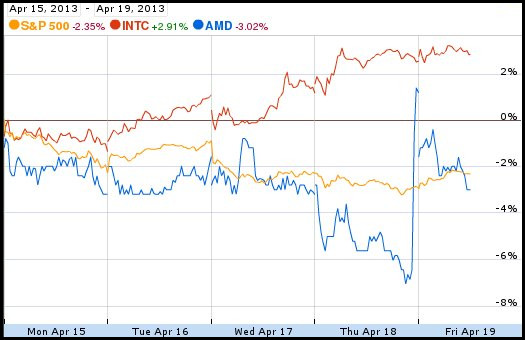 In a larger perspective, AMD shares have lost 70% of their value over the past year. The market for PC-style systems is reportedly on its deathbed, killed by smartphones and tablets where AMD plays no part today. On top of that, Intel is kicking AMD's behind in the frail market that remains.

The company does have a three-step turnaround plan in place, and it goes something like this:

CEO Rory Read says the restructuring step is largely done, and it's all about executing on product plans in 2013. That includes a whole new lineup of low-power chips for mobile platforms, code named Temash. AMD's chips also power all three of the major gaming console refreshes, so the company has a large stake in the traditional video gaming market.

Sounds like a decent roadmap toward healthy operations, and simply returning to year-ago share prices would be more than a double for current shareholders.

But then it all comes down to execution. That hasn't been AMD's strong suit in recent years, and Intel will plant its big feet in the road ahead to blow headwinds at its smaller competitor, every step of the way.

I wouldn't buy AMD shares here, but I can understand if turnaround hunters would take that plunge. The climb ahead is both very risky and perhaps hugely rewarding. The three-step plan is encouraging enough that I'm removing my thumbs-down CAPScall on AMD today. Keep up the good work for another quarter or two, and I might even turn that antagonistic finger all the way up in the end.