Please ensure Javascript is enabled for purposes of website accessibility
Log In Help Join The Motley Fool
Free Article Join Over 1 Million Premium Members And Get More In-Depth Stock Guidance and Research
By Adam Levine-Weinberg - Apr 20, 2013 at 10:00AM

Green Mountain Coffee Roasters (GMCR.DL) has enjoyed tremendous growth in the past few years as its line of Keurig brewers and the associated K-Cup coffee pods have gone mainstream. Keurig is the hands-down leader in the rapidly growing single-serve coffee segment. Consumers have warmed to the concept, as single-cup brewers are less messy than traditional coffeemakers and the coffee stays fresher in sealed portion packs. 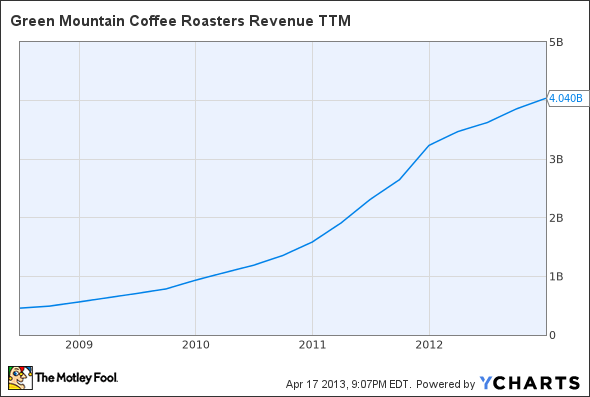 The beauty of the Keurig system is that it follows a razor/blades business model. Green Mountain doesn't make very much money selling Keurig brewers; but it makes very healthy profits selling the K-Cup portion packs. However, some key patents protecting the K-Cup expired last September. This allows competitors to legally market knockoff products (although Green Mountain still holds other unexpired patents that cover improvements made to the original K-Cup design). The key to predicting Green Mountain's success or failure is understanding whether these knockoffs will become popular enough to cut into sales and/or margins for Green Mountain's K-Cups.

The bull case
Green Mountain's management seems unfazed by the issue. On the company's most recent earnings call, executives predicted that customers will remain loyal to genuine K-Cups because of their high-quality standards. Only Green Mountain and its authorized partners can offer K-Cups with the state-of-the-art design. Furthermore, Green Mountain plans to invest in merchandising support for retail partners, in order to get better shelf placement for Green Mountain K-Cups. Green Mountain executives therefore believe that knockoffs will represent at most 15% of the K-Cup market.

So far, the patent expiration has not hurt results much. In the fall quarter -- the first full quarter after the patent expired -- K-Cup unit sales grew 26% and K-Cup revenue grew 21%. The main reason that revenue growth trailed unit growth was a mix shift toward cheaper brands in the Keurig system, rather than broad-based price cuts. The company's gross margin remained above 30%, which is particularly impressive because the fall quarter has a high proportion of low-margin brewer sales, relative to K-Cup sales .

Green Mountain's Keurig ecosystem is also being challenged by smaller competitors, like San Francisco Bay Coffee, which sells a Keurig-compatible pod called "OneCup," which does away with the K-Cup's plastic housing. The company claims that this reduces the manufacturing cost, and it clearly reduces plastic waste as well. This could be very appealing to environmentally conscious consumers who have historically been a major constituency for Green Mountain.

Having used both Green Mountain K-Cups and the San Francisco Bay OneCups myself, I found the quality to be similar. OneCups are not airtight, so they need to be stored in a sealed plastic container, but the coffee tastes just as fresh. Having switched, I doubt I will ever go back to official K-Cups. The long-term risk for Green Mountain is that its best customers gradually find these other brands, try them, and then make a permanent switch.

Foolish conclusion
For now, I believe that the growth of the Keurig installed base will be sufficient to drive earnings growth for Green Mountain Coffee Roasters. Longer-term, I think the penetration of unauthorized brands could move well beyond 15%. Eventually, there could be a tipping point where Green Mountain loses its pricing power because of heavy competition from unauthorized K-Cups. Additionally, the entire Keurig ecosystem could be challenged soon by Starbucks' (SBUX 2.04%) new Verismo system. Starbucks seems determined to gain a leading share in the single-cup coffee market, and has the resources to make a strong effort. With all of these risk factors, Green Mountain investors will need to keep a careful eye on the company's performance going forward.