The Dow has risen dramatically in 2013, but how does it compare to the performance of other indexes around the world?

The Dow Jones Industrial Average (^DJI 0.60%) has wasted no time rewarding investors this year on its march to new record highs and beyond. Even with last week's losing streak, the Dow has posted a year-to-date gain of 11% as the U.S. economy slowly recovers. The rest of the world is not performing entirely well, however: While economies such as Japan have flourished, others, such as the debt-plagued eurozone and slumping China, have slogged through a difficult 2013 so far. Let's see how these events have affected the world's leading stock indexes -- and which country's investors have made out the best this year.

The Dow surges, but international results remain mixed
The Dow has gotten off to a good start to the year despite being weighed down by a few lagging stocks, such as industrial giant Caterpillar (CAT 1.78%). While a majority of Dow stocks have recorded double-digit percentage gains in 2013, Caterpillar has lost more than 10% so far due to slowing economic conditions around the globe. Sales are falling at the company, and China's recent slowdown has sent investors fleeing.

Caterpillar is hardly the only stock on the markets negatively affected by China's slump. Indeed, Hong Kong's Hang Seng (HSIINDICES: ^HSI) index has suffered this year as the world's second-largest economy has slowed. 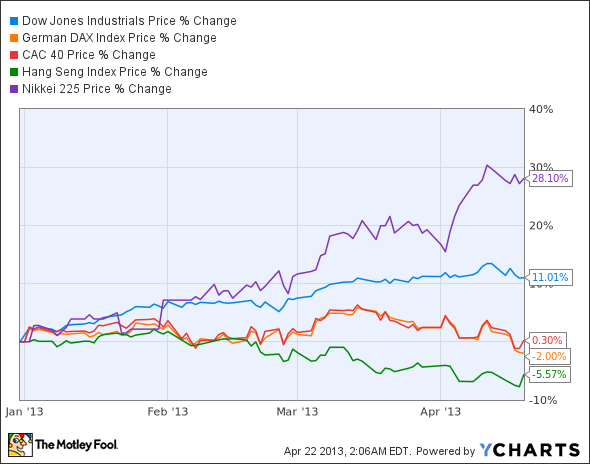 It's hardly surprising that the Hang Seng has underperformed the Dow so significantly. Where the American economy has regained its footing following the depths of the 2008 recession, the Chinese economy has lost its illustrious double-digit GDP growth that it experienced last decade. China's GDP growth rate fell to 7.7% last quarter, dipping from 7.9% in 2012's fourth quarter and disappointing economists hoping for an uptick. The new Chinese government has focused on stable growth even at the cost of a slower nominal rise, and while that should help China's economy in the long term, it's not doing much good for the Hang Seng or for Chinese companies, particularly in the industrials and materials sectors, right now. Chinese economists are optimistic about future quarterly growth this year, but it's doubtful that Hong Kong's index will manage to catch up to the Dow's torrid pace.

Europe has also experienced a tough economic climate this year, and the German DAX (^DAX) and French CAC 40 indexes haven't had the best time so far in 2013. France's index has managed to climb a fraction of a percent, but that hasn't helped many French stocks this year: French oil giant Total SA (TTE 2.75%) has lost more than 10% year to date despite the company's forward-looking moves to expand into Africa and other locations; Total recently agreed to the construction of a refinery in Uganda for 30,000 barrels per day of refining. The DAX has dipped as Germany, long one of the lone bright spots in Europe, has seen its economy suffer from the eurozone's crisis and its PMI dive into contraction territory.

The Dow has looked good against these slumping economies, but even the American blue-chip index's gains can't compare to the standout success Japan has experienced this year. The Nikkei index has blown away the competition across the world with its gains this year as new prime minister Shinzo Abe's easy-money policies and massive stimulus plan have invigorated the Japanese economy after two decades of stagnation. Japanese stocks have gone on a tear this year, with the financial sector in particular surging on the back of stimulus. Nomura Holdings has lit up the markets as one of 2013's stars, gaining more than 30% year to date. So far, Japan and the Nikkei have cruised past all other international markets this year. It hasn't even been close.