Investors pushed Coach (NYSE:TPR) stock up by more than 9% on Tuesday, after the luxury goods retailer beat analysts' estimates for its third quarter. Coach reported earnings of $0.84 a share for the period, whereas analysts were expecting earnings per share of $0.80 at best. To top off the impressive quarter, Coach rewarded stockholders with a dividend hike of $0.15 annually. This means Coach stock will now pay an annual dividend of $1.35 per share.

However, the good news masked red flags that would otherwise be cause for concern at the company.

While most investors focused on the upbeat earnings announcement, little attention was given to the fact that Reed Krakoff, the company's president and executive creative director, will be leaving the company when his contract expires next June. The creative director is the lifeblood of a brand. Moreover, during his 16-year career at Coach, Krakoff is credited with transforming the company from a leather goods seller into a global luxury brand.

The timing of Krakoff's departure is equally troubling. The news comes as the company attempts to rebrand itself as a so-called "lifestyle" brand, in order to fend off increased competition from Michael Kors (NYSE:CPRI). As you can see from the chart below, the namesake fashion company has markedly outperformed Coach stock year to date. 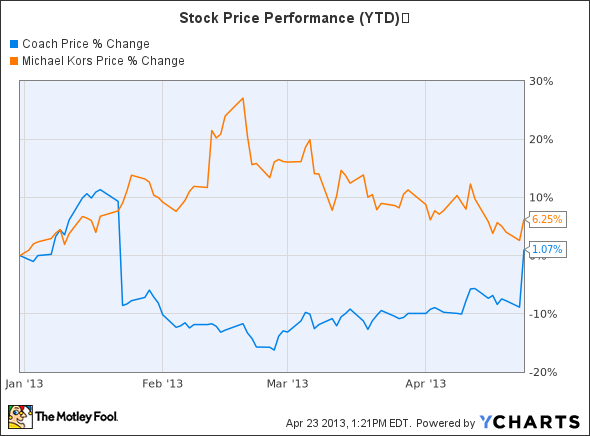 Going forward, Coach's retail strategy of becoming a lifestyle brand could be even harder to achieve without the vision of longtime creative director Krakoff. The famous fashion designer Michael Kors, on the other hand, is still heavily involved in the Kors brand.

In addition to the competitive setbacks Krakoff's resignation may cause, the news comes just months after Coach's longtime CEO Lew Frankfort announced his own plans to leave the company next year. Ouch.

These impending departures by top executives could cause investors to dump Coach stock down the road. For this reason, investors may want to wait on the sidelines as the stock works through this transitional period. In the meantime, investors may want  to take a closer look at rival stock Michael Kors.