There was a brief flash crash in the past hour in which the Dow briefly went negative, but the index quickly bounced back. The flash crash happened immediately after the Associated Press' Twitter account, reportedly under the control of hackers, falsely reported: "Two Explosions in the White House and Barack Obama is injured."

The Department of Commerce reported that new-home sales rose 1.5% in March to a seasonally adjusted annual rate of 417,000. That's up from 411,000 in February and 18.5% higher than last March's 352,000. This is welcome news after yesterday's weaker-than-expected existing-home sales report. 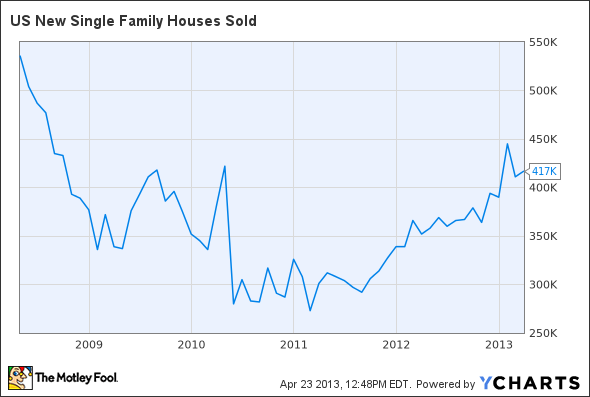 The second factor driving up stocks today is expectation-beating earnings. Travelers (TRV 0.21%) is among today's best Dow stocks, up 2.2% after beating Wall Street earnings forecasts. The insurance company reported that earnings were up 11% to $2.33 per share, well above expectations of $2.02. Revenue was down 1% to 6.39 billion -- still above expectations of $6.23 billion. Travelers was able increase its prices in the quarter, and the company suffered less in catastrophe losses than expected. The company also announced that it would increase its dividend by 9% to $0.50 for a forward yield of 2.3% and that it had repurchased 3.7 million shares in the first quarter. Travelers still has a $1.86 billion buyback authorization remaining.

Today's Dow leaders
DuPont (DD) is faring even better, up 3.8%. DuPont reported net income of $3.58 per share, which includes a $1.9 billion gain from the sale of its performance coatings unit to The Carlyle Group. Excluding one-time items, EPS was down 5% from last year to $1.56, but that's still better than analyst expectations of $1.52 per share. Revenue was up 2% to $10.4 billion, in line with expectations. DuPont kept its guidance for the year constant at $3.85 to $4.05 per share. It also announced a 5% increase in its quarterly dividend to $0.45 per share for a forward yield of 3.4%.

Second for the Dow today is Bank of America (BAC -1.29%), up 3.1%. Financial stocks are benefiting from the positive housing-market news and the strength of Travelers' earnings. And Bank of America is getting an extra boost after a Morgan Stanley analyst upgraded the stock from "equal-weight" to "overweight," saying B of A will continue cutting expenses and will be rid of its litigation risks by the end of the year.