Boeing stock is up on better-than-expected earnings.

The only U.S. economic release today was the Department of Commerce's advance report on durable goods for March. Durable goods are goods meant to last more than three years, and new orders for them are seen as a leading indicator of manufacturing activity. New orders fell by 5.7% in March to $216.3 billion, worse than analyst expectations of a 3.2% drop. 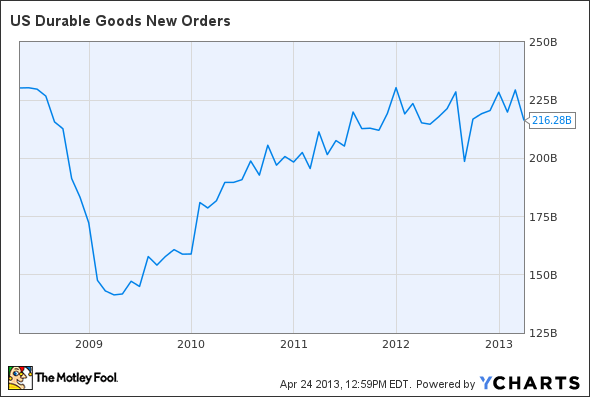 The durable-goods report can be highly volatile, especially because of orders for aircraft. Excluding transportation, new orders decreased just 1.4% -- still not good for the stuttering recovery. Boeing (BA 3.52%) was one of the main culprits, as new orders for nondefense aircraft and parts dropped 48% in March. Boeing reported just 39 orders for aircraft in March, down from February's outstanding 179.

Holding the Dow back today, though, are disappointing earnings from AT&T (T -0.14%) and Procter & Gamble (NYSE: PG), which are both down more than 5%. AT&T reported earnings that met expectations but showed that the company lost market share to Verizon.

Today's Dow leader
Despite its low March order numbers, Boeing is leading the Dow today, up 3.3% thanks to an upside surprise in its earnings. Boeing reported that earnings per share grew 18% to $1.44, while revenue fell just 3% to $18.89 billion, beating expectations of $18.84 billion. The company reaffirmed its guidance for full-year EPS of $5 to $5.20.

The first quarter was rough for Boeing, as its 787 Dreamliner was grounded by the FAA in mid-January due to problems with the aircraft's batteries. Last week the FAA approved Boeing's battery fix, and on today's conference call CEO Jim McNerney said the company expects to resume deliveries of 787s next month and to deliver more than 60 Dreamliners through the rest of the year.

The company also announced today it will begin buying back stock under its previously announced buyback authorization. This is a bittersweet announcement, as it would have been better for Boeing shareholders if the company had bought back at the low prices available amid last quarter's uncertainty, rather than waiting until things had begun to look up and Boeing stock had gained $20.