The growth of buybacks.

Earnings among S&P 500 companies are at an all-time high. By quite a bit, too: Operating earnings per share last year were more than 10% above the previous peak set in 2006, when the economy topped out before the recession.

Dividend payouts are also at an all-time high, but there is much less to be excited about here. Companies have been paying out a lower share of their earnings as dividends for decades, and the trend shows little sign of slowing. The dividend payout ratio is pitiful: 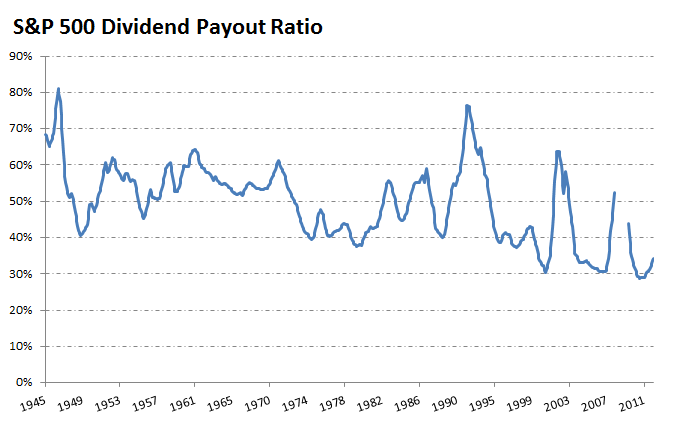 A lot of this decline over time is explained by companies using more of their free cash flow to repurchase shares. Benjamin Graham's classic 1949 book contains deep analysis and commentary on dividends, but scarcely a mention of share buybacks. That changed dramatically after the 1980s. Legg Masson has shown that from 1985 to 2011, S&P 500 dividends increased fourfold, but share buybacks increased 21-fold.

The impact this shift has on how investors are compensated is deep. As Shawn Tully of CNNMoney pointed out earlier this year, the dividend yield on ExxonMobil (XOM 0.79%) is a little more than 2%, but the total yield including buybacks is north of 7%. Pfizer's (PFE 3.59%) dividend yields more than 3%, but with buybacks the company returns 7.6% to shareholders. Wal-Mart's (WMT 0.11%) total yield is about double its dividend yield.

There are mountains of evidence showing that, on average, investors are better off with dividends than share buybacks, as CEOs have a terrible history of buying back their shares at nosebleed prices.

But I think the damage of the shift toward buybacks may even be underrated. With interest rates at zero, investors have been clamoring for yield wherever they can find it. For years, that's been stocks with high dividends, whose prices have been pushed to record levels and yields down to near record lows. Shares of Verizon (VZ 0.88%) now yield less than 4% and Altria Group (MO 0.00%), less than 5%.

These are still healthy yields, particularly compared with fixed-income alternatives -- and both companies have high dividend payout ratios. But I can't help but wonder whether companies favoring buybacks over dividends will ultimately be a disservice to companies with high dividends. The lack of yield among most stocks drives up valuations at companies that still do provide reasonable payouts, and high current valuations will eat into future returns.