There was great news for the housing market this morning.

Or terrible news, depending on how you interpreted it.

Nationwide housing prices grew 9.3% in the 12 months ended February, according to the S&P Case-Shiller Housing Index. That was the biggest annual gain since 2006, when the housing bubble peaked.

This is excellent for homeowners, especially those underwater on their mortgages. But it's scary for those who think it signals a return of the housing bubble that did so much damage to the economy. And there were plenty of them.

Please. Calling this a housing bubble is dangerously premature.

As Warren Buffett says, "Price is what you pay; value is what you get." Just as stock prices surged in 2009 without pushing valuations to extremes, rising home prices don't necessarily indicate mania in the housing market.

There are a few ways to measure home values, rather than simply home prices.

One is the inflation-adjusted price over long stretches of history. Yale economist Robert Shiller calculates this data going back to the late 19th century:

Far from bubble territory, real home prices are pretty close to the historic average. And this may even be overstating the case, since the average square footage of American homes has increased tremendously over the past few decades.

Another is the ratio of home prices to average rents. Here too, "up" doesn't put us anywhere near "bubble": 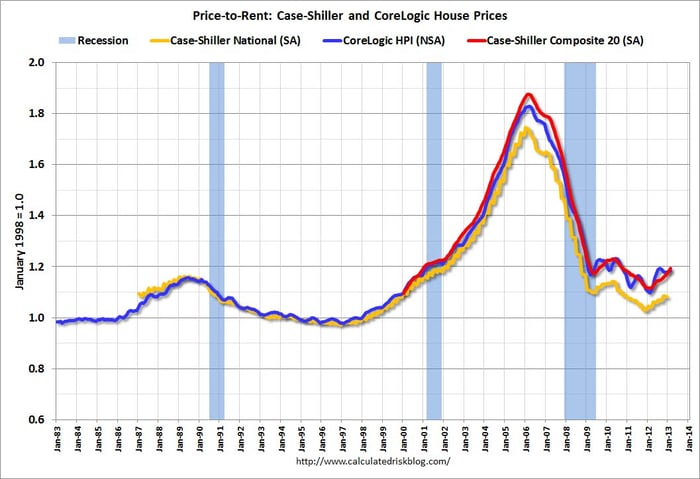 To put some numbers on this, a ratio of nationwide home prices to rents I calculate with Professor Shiller's data and the owners' equivalent rent portion of the Consumer Price Index is now almost exactly equal to its average since 1987, which is the farthest back we have good data for. If you think current prices look bubbly, then you implicitly take the position that we've been in a bubble for more than a quarter-century. Which is just cranky. 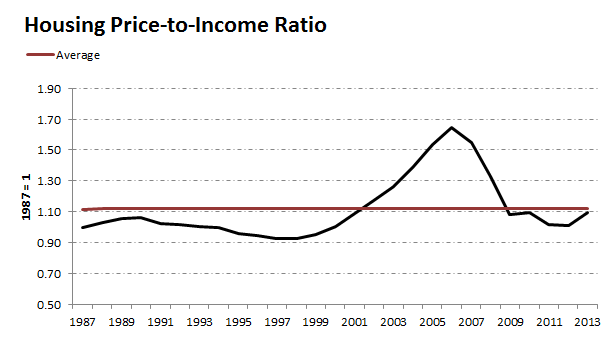 Here too, it's kind of obnoxious to call this a new bubble.

Finally, we might call the housing market a bubble if a growing share of Americans were becoming homeowners, as lending standards dropped. But the opposite is occurring. According to the Census Bureau, the homeownership rate is now at the lowest level since 1995.

The reason home prices are rising right now has little to do with exuberance. Instead, the rate of new-home construction is still below the rate of household formation. Coming off years when new construction barely kept up with the rate of housing demolitions, the supply of homes for sale is now the lowest it's been eight years.

Homebuilders are trying hard to ramp up production, but doing so is easier said than done, given labor shortages in the construction industry. They're also enjoying pricing power for the first time in seven years and are unlikely to let go of it until they have to. As Donald Tomnitz of DR Horton (NYSE:DHI) recently put it:

We're clearly raising prices on each and every one of our communities on a house-by-house, on a subdivision-by-subdivision basis. ... We do have costs which are going up in some of our markets and with some of our subcontractors, but clearly, our pricing power is exceeding the cost increases that we have today.

There's plenty of room for the housing industry to run, as Jeffrey Mezger of KB Homes (NYSE:KBH) pointed out:

Although the pace of the housing market recovery is gaining momentum, it is important to keep in mind that we are still in the early stages of the recovery. And there's a long way to go before the industry reaches normalized activity levels.

Economist A.C. Pigou once said: "[T]he era of optimism dies in the crisis, but in dying it gives birth to an era of pessimism. This new era is born, not an infant, but a giant." With cries of bubbles after home prices show the slightest hint of optimism, I now know what he means.