Many observers have become confident in the last few years that Amazon.com (NASDAQ:AMZN) is building a moat that will allow it to dominate e-commerce for decades. Accordingly, Amazon stock has recorded tremendous gains since the end of the Great Recession: 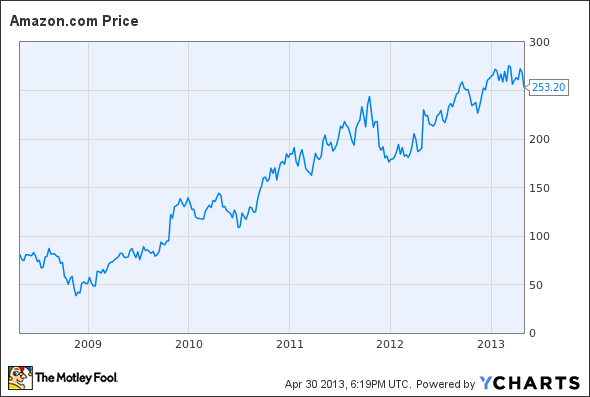 However, Amazon shares dropped significantly after the company reported earnings last Thursday. While EPS beat analysts' estimates, Amazon's revenue did not quite meet expectations, and the company also guided for slower-than-expected revenue growth next quarter. Amazon has a high-class problem: It has grown so much in the last few years that it is getting harder to maintain that growth rate. That said, while Amazon's business is fundamentally healthy, investors are still coming to grips with what the company is actually worth. Based on Amazon's likely future growth profile, the stock still seems overvalued after its recent drop.

Growth: Great is not good enough
In the first quarter, Amazon's revenue grew 22%, or 24% holding exchange rates constant. This was slightly better than what I had expected, but still below what Wall Street was hoping for. Most companies would be thrilled to have revenue growing this quickly, but it still represents a significant slowdown from Amazon's 34% growth rate (in constant currency) from first quarter 2012.

There are a few factors that are hampering Amazon's growth. First, Amazon has taken such a large piece of the media market (e.g., books, music, and movies) that it is starting to saturate the market. Media revenue grew just 10% last quarter in constant currency. Second, Best Buy's (NYSE:BBY) decision last fall to start matching Amazon's prices has negated Amazon's biggest advantage in the consumer electronics market. As a result, Best Buy seems to be regaining some market share for expensive products like big-screen TVs.  Other retailers like Target have also introduced price-matching policies, which will tend to amplify the effect on Amazon.

Lastly, while Amazon Web Services continues to grow rapidly, revenue growth -- not to mention profitability -- is being offset by brutal competition from Google (NASDAQ:GOOGL) and Microsoft (NASDAQ:MSFT). Both have massive financial resources compared to Amazon, and they view cloud services as critical to their business strategies. Accordingly, both seem willing to invest substantial sums in their cloud services platforms while cutting prices as fast as Amazon does.

More taxes coming?
The attempts by many states to impose sales tax on online purchases will create another headwind for Amazon. The imposition of sales tax on Amazon purchases in Texas, Pennsylvania, and California during 2012 may be partially responsible for the slowdown in Amazon's revenue growth in the past several quarters. However, Amazon still doesn't collect sales tax in most states.

The Marketplace Fairness Act, up for vote in the Senate this month, could change that. If the bill passes both chambers (which is not guaranteed to happen), it will allow states to require retailers to collect sales tax. Amazon prides itself on offering the lowest prices, but in jurisdictions where it does not currently collect sales tax, it has an unfair advantage over brick-and-mortar retailers. The combination of increased sales tax collection and price-matching campaigns by competitors like Best Buy could slow Amazon's growth rate going forward, as Amazon would no longer have a price advantage.

Foolish conclusion
Amazon is sure to continue growing revenue for many years to come, and earnings growth is likely to follow. However, up until now investors have overlooked some of the challenges that it will face in maintaining a high growth rate as revenue approaches $100 billion in the next few years. Amazon still trades for more than 70 times analysts' 2014 earnings estimates, and this valuation only makes sense if it can maintain the current revenue growth rate almost indefinitely. It faces enough obstacles today that this rosy scenario does not seem likely.