Petroleum products logistics provider Buckeye Partners (NYSE:BPL) is out with its first-quarter earnings. It was a very solid quarter for the MLP with steady performance across its business segments. Let's take a closer look at how the company performed in three areas that I previewed as being the most important to watch.

Buckeye beat analysts' expectations by delivering first-quarter income of $89.3 million, or $0.86 a unit, which exceeded the projection of $0.73 a unit. Revenue of $1.34 billion also beat expectations of $1.29 billion. Strong performance at Buckeye's terminal operations along with a big improvement at its energy services segment led to the excellent performance this quarter.

Buckeye reported distributable cash flow of $124.2 million which provided it with a coverage ratio of 1.21 times. This represented a very nice year-over-year increase to distributable cash flow which was $73.6 million last year and represented a coverage ratio just 0.78 times. Better overall business performance and the contribution from its growth projects provided a nice boost to the bottom line. The big news here is that the coverage ratio was high enough this quarter for the company to finally raise its distribution.

The growth
One of the contributing projects this quarter was that Buckeye was able to place 1.6 million barrels of additional storage capacity into service at its BORCO terminal in the Bahamas. The company has been investing heavily to expand capacity at BORCO since acquiring it in 2011. BORCO, which is the crown jewel of its international operations, still has a lot of growth left as the company believes it can nearly double capacity over the coming decade. It's perfectly positioned to benefit from the growth in Latin American crude oil production as well as being an excellent staging areas for ships coming through the soon to be expanded Panama Canal. Continued growth at BORCO, as well as across its platform will be important to drive future distribution growth.

While it might not seem like much of an increase, this is an important first step. Slow and steady distribution increases have a very noticeable impact on the value of the underlying units. Just take a look at this chart of two midstream giants: Enterprise Products Partners (NYSE:EPD) and Energy Transfer Partners (NYSE: ETP): 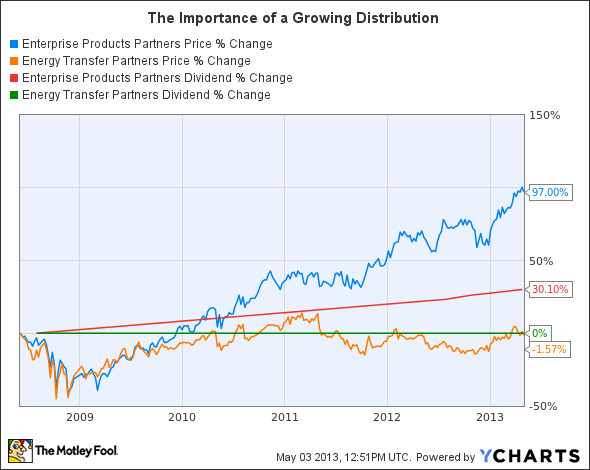 As you can see, Enterprise's distribution has slowly headed higher as the company has consistently raised it for 35 consecutive quarters. This has yielded excellent returns for investors. Meanwhile, Energy Transfer's distribution has been stagnant for the past five years which has also stagnated the returns of unitholders. Again, the chart tells the whole story, so it's welcome news for Buckeye investors to see the distribution heading higher again.

Foolish bottom line
Overall, this was a very solid quarter for Buckeye. Its earnings and cash flow are improving and it's finally raising its distribution. This is exactly the performance I wanted to see after making Buckeye my top MLP to buy last month.