Please ensure Javascript is enabled for purposes of website accessibility
Log In Help Join The Motley Fool
Free Article Join Over 1 Million Premium Members And Get More In-Depth Stock Guidance and Research
By Evan Niu, CFA - May 6, 2013 at 9:30PM

There's been an awful lot of talk over the past few years about how badly Apple (AAPL 0.64%) and China Mobile (CHL) need each other. The iPhone maker wants access to the largest mobile subscriber base in the world, while the No. 1 Chinese carrier wants a flagship device that gulps down 3G data.

While China Mobile has never officially offered the device, the two smaller carriers do. China Unicom (CHU) was the first Chinese iPhone carrier in 2009, and China Telecom (CHA) followed suit in 2012. China Unicom and China Telecom have been consistently chipping away at China Mobile's lead in the lucrative market for 3G subscribers, a trend that has widely been attributable in part to the iPhone.

However, China Mobile has come roaring back in the first quarter without the iPhone's help and now has 41% of the market. Maybe the carrier doesn't actually need Apple. 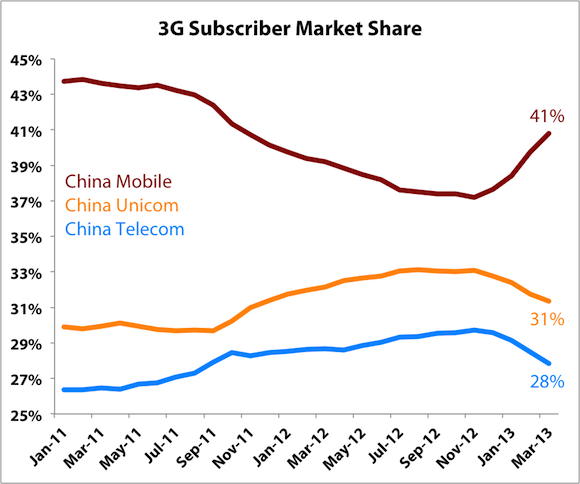 China Mobile's gains in 3G come as the company continues to invest heavily in beefing up its 3G network. Simultaneously, the carrier is focusing on pushing low-cost 3G smartphones made by local OEMs like ZTE, Huawei, and Lenovo. China Mobile has historically had inferior 3G penetration relative to its rivals, so just migrating existing 2G subscribers to 3G can translate into meaningful 3G share gains, even if the company's overall subscriber base isn't growing as quickly.

Investors will notice a sharp uptick in 3G penetration over the past few months. 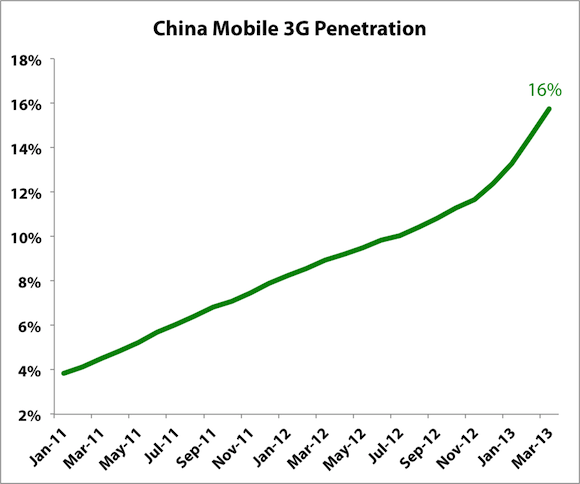 These initiatives combined are helping China Mobile expand its lead over China Unicom and China Telecom.

At the same time, just because China Mobile may not feel like it needs the iPhone anymore doesn't mean it won't benefit from pairing with Apple. If anything, China Mobile now has another bargaining chip at the negotiating table.