Last week, Samsung and Google (NASDAQ:GOOGL) dropped a bombshell for Android enthusiasts. The pair is preparing to launch a version of Samsung's newest Galaxy S4 flagship running stock Android. In no uncertain terms, the move is obviously Samsung throwing Google a bone, since the unsubsidized device is unlikely to make a dent in the market (the vast majority of consumers prefer subsidized prices).

There may be some tensions between the two companies since Samsung continues to subtly downplay Google's role in its devices, and shipping a version running stock Android will please the niche segment of users willing to pay full price for a "Nexus user experience." 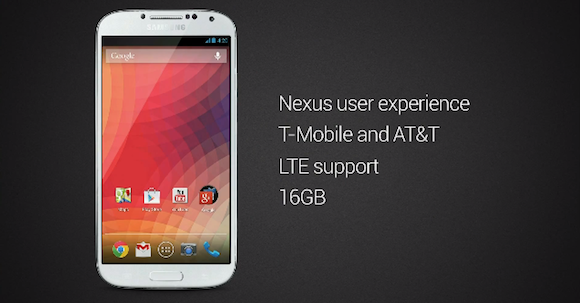 Interestingly enough, the announcement sparked a response from rival HTC, the Taiwanese OEM that's been trying to be more vocal lately and has been actively bashing Samsung's cheap plastic ways. The latest jab at the South Korean conglomerate also included an interesting tease of what HTC may have in store.

Her comment suggests that HTC may be preparing to release more stock Android devices, recommending that anyone willing to pay $649 should just wait. Many enthusiasts are hoping for an HTC One running stock Android, given its high-quality hardware. However, an HTC exec followed up with Android and Me and said that the company is "not currently" planning such a device.

HTC currently offers a model that runs stock Android, the First. The First is the first real Facebook Phone with Home pre-installed. While the device appears to be bombing, users can turn off Home and find a stock Android experience running underneath.

Still, the possibility of more OEMs exploring stock Android has profound implications on the future of Android. In an extreme case, if manufacturers embraced stock Android entirely, that would ensure quick hardware commoditization and margin erosion. If all devices ran the same software, OEMs would end up competing entirely on price much like they did during the rise of Microsoft Windows.

Is This the Future of Android? @themotleyfool #stocks $GOOGL $FB $MSFT Next Article
Current