FedEx (NYSE:FDX) has run into turbulence in the past year or two, as the global economy has not recovered from the Great Recession as quickly as expected. Meanwhile, high fuel prices have increased the cost of shipping, crimping FedEx's profitability. As a result, FedEx stock has been range-bound for several years, rarely falling below $80 or rising above $100. 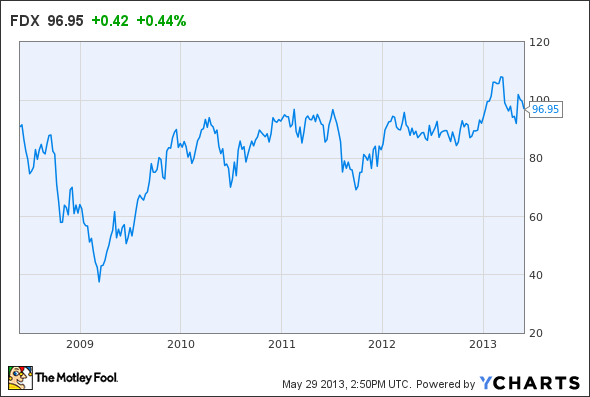 However, last year FedEx finally recognized the need to realign its cost structure with the new economic environment. The company has laid out a clear plan to reduce costs through fleet renewal, voluntary employee buyouts, and downsizing of the Express network. These initiatives position FedEx stock for strong performance over the next several years as efficiency gains catalyze strong profit growth.

The biggest savings come in three areas: (1) slimming down the air freight network ($700 million in annual savings); (2) replacing inefficient, outdated aircraft ($300 million annually); and (3) achieving staffing efficiencies ($400 million annually). Investors were pleased by the plan, and have sent FedEx stock up nearly 15% since it was unveiled.

Most importantly, FedEx should be able to implement all of these cuts without impacting customers in a noticeable way. Most of the Express capacity being cut is "excess," and has been filled up with lower-yielding economy cargo. Since economy shipments are not as time-sensitive, they can be sent by ship, ground, or through a contract with a passenger airline's cargo unit. This will allow FedEx to keep only the Express capacity needed for overnight or two-day shipments.

With the company rationalizing its operations, it has an opportunity to reduce staffing costs. FedEx has already completed voluntary buyouts for a number of high-level executives, and thousands of other employees are likely to leave in three waves over the next 12 months. It has also deferred new hiring in order to cut staff while minimizing severance costs.

FedEx still sees plenty of demand for freight services, but customers are increasingly willing to accept slower service to save money. The company's cost-cutting moves allow it to continue serving those customers while reducing expenses related to "international priority" services. These initiatives will be good for FedEx stock in the long run.

Fleet restructuring: just in time
The other part of FedEx's cost-cutting plan is fleet restructuring. Cargo airlines tend to use older aircraft than passenger carriers, and FedEx is no exception. For example, it still operates 17 Boeing (NYSE:BA) 727 aircraft, some of which are nearly 40 years old. The Boeing 727 was introduced 50 years ago and is very inefficient, burning much more fuel than modern aircraft and requiring a three-person cabin crew (whereas modern aircraft need only two pilots).

FedEx recently agreed to buy 14 used Boeing 757s from United Airlines (NASDAQ:UAL), with options to buy up to 16 more. According to The Wall Street Journal, the Boeing 757 burns 33% less fuel than the 727 but carries 20% more freight! Since United was already planning to replace the 757s with brand-new Boeing 737s (which are even more fuel-efficient), FedEx probably got a good price, making the deal a no-brainer.

FedEx is also in the midst of retiring a number of other outdated A310 and MD-10 aircraft, replacing them with Boeing 767s and Boeing 777s. The company also expects that by reducing its Express network, it will be able to retire even more older aircraft. This fleet renewal program will be great for FedEx stock owners, as recent improvements in aircraft technology make it possible to replace outdated planes with more efficient models at a relatively low cost.

Ready for takeoff
Today, FedEx stock trades for little more than it did five years ago, but the company has significantly diversified its business with the growth of FedEx Ground. Moreover, the cost-cutting initiatives highlighted above provide significant upside for shareholders over the next several years. The stock trades for 16 times adjusted earnings, and profit is expected to grow by more than 20% next year as cost-cutting initiatives begin to take hold. With this reasonable valuation and solid outlook, FedEx looks like a good buy candidate for long-term investors.