This chart is just unbelievable. Bristol-Myers Squibb (NYSE:BMY) is a pharmaceutical company with a market cap of $77 billion, yet it's trading more like a biotech, running up nearly 13% since the ASCO abstracts were released. 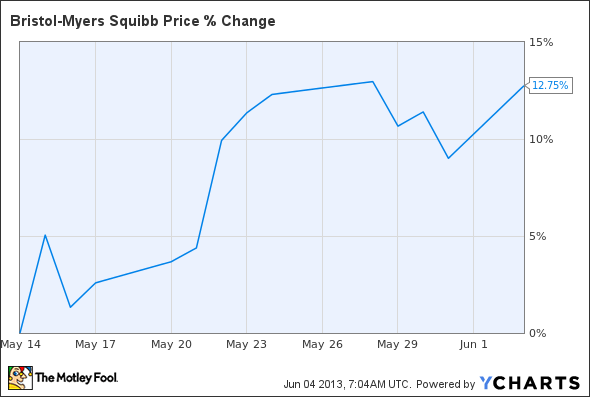 Investors are clearly excited about Bristol's nivolumab, which helps the immune system fight cancer tumors. But is the data really worth an $8.8 billion increase in the valuation of Bristol? That's highly debatable, but there are clearly reasons to get excited.

Some of the most compelling data for nivolumab comes from a trial testing it in combination with Bristol's melanoma drug Yervoy. The drugs work in different ways to encourage the immune system to attack cancer cells. Yervoy activates cytotoxic T lymphocytes by blocking a molecular switch and then keeps dendritic cells from training the lymphocytes to attack. Nivolumab blocks a different molecular switch, PD-1, that tumor cells use to keep T cells from attacking the tumor.

In the phase 1 trial presented at ASCO, 53% of the 17 melanoma patients responded to the doses of Yervoy and nivolumab that will be used in the phase 3 trial. And when they responded, they responded really well: All of the responders saw at least 80% tumor shrinkage within 12 weeks. Three of the 17 had a complete response.

If the data pans out in future trials, an FDA approval will not only produce higher revenue through the sales of nivolumab, but sales of the drug will also generate higher sales of Yervoy. In the first quarter, sales of Yervoy were $229 million, up 49% year over year and on its way to potentially reaching blockbuster status this year.

Beyond melanoma
The key to reach mega-blockbluster status for nivolumab is to get approved to treat other types of cancer. Melanoma is a decent size and should support a couple of blockbuster drugs, but it's not hard to see sales of nivolumab and Yervoy topping $5 billion annually if the drugs could get approved for other indications.

Bristol is testing its combination in lung and renal cancers, and one of its competitors, Roche (OTC:RHHB.Y), which has a drug called MPDL3280A that works in the same pathway, has shown that its drug can work in six different types of cancer.

It appears the molecular switch to turn off the immune system is conserved over different tumor types. Now the companies just need to prove that the drugs work in larger trials, get them approved by regulators, and sell billions of dollars worth of drugs.

At least some companies will
With three players in the mix -- in addition to Bristol and Roche, Merck's (NYSE:MRK) lambrolizumab works using the same mechanism of action -- it isn't clear which company will win this game. Lambrolizumab produced a 52% response rate at the highest dose tested. Roche's MPDL3280A produced a 36% overall response rate in a variety of different types of tumors that stained positive for its target. Without any control arms in the phase 1 studies, though, it's impossible to compare the trials and declare a winner.

Bristol looks like it has the quickest path to approval, but that probably doesn't matter all that much; in the long run, doctors are going to use whichever drug produces the best overall survival.

Bristol might have an advantage since it has Yervoy, and even if nivolumab doesn't work as well as the other drugs targeting the PD-1 mechanism, Bristol will still see revenue from Yervoy increase if doctors use Bristol's competitors in combination with Yervoy.

Something more going on
As impressive as the data is, it's hard to say nivolumab's ASCO data makes Bristol worth $8.8 billion more than it did before they was revealed. Put another way, would you buy a biotech with an $8.8 billion market cap if it had only one drug that had just completed phase 1 development? There are biotech companies with drugs on the market that aren't valued that high.

Clearly this run up, which actually started months ago -- Bristol is up 40% for the year -- has more to do with investors' having confidence that Bristol can get growing again after losing Plavix than the addition of the risk-adjusted value of nivolumab. We've seen a similar run recently in Johnson & Johnson stock.

This Pharma Is Trading Like a Biotech @themotleyfool #stocks $BMY $RHHB.Y $MRK Next Article
Current