The development of the Bakken oil play in North Dakota has been a game changer for oil production in the U.S. The play is already producing incredible numbers and might only be 10% developed. It has created great wealth for early investors in the play, such as Kodiak Oil & Gas (NYSE: KOG), which has been growing its production by triple digits and still has plenty of room to run.

Most investors already know about the Bakken and are ready to turn their attention to the next play exhibiting Bakken-like potential. Some think that could be the Monterey Shale in California. With estimated technically recoverable resources of more than 15 billion barrels of oil, the play could be substantial. That is if producers can get past the anti-fracking mind-set that besets the state, as well as overcome substantial technical challenges in developing the play.

That's why others believe that the next Bakken could lie within the mature oil fields of the Permian Basin in Texas. Particularly, the best prospective candidate is the Cline Shale, which could hold an estimated 30 billion barrels of recoverable oil. Only time will tell if that's even remotely true.

One company to watch here is Devon Energy (NYSE:DVN). The company has 389,000 net acres in the play and plans to drill 30 wells this year. To help mitigate some of its risk in exploring the play, Devon signed a $1.4 billion joint venture deal with Sumitomo. That deal covered both the Cline and Wolfcamp shales by giving Sumitomo a 30% stake in these two prospective Permian Basin plays. If the play turns out to be even remotely close to early estimates then Devon could have something special on its hands. 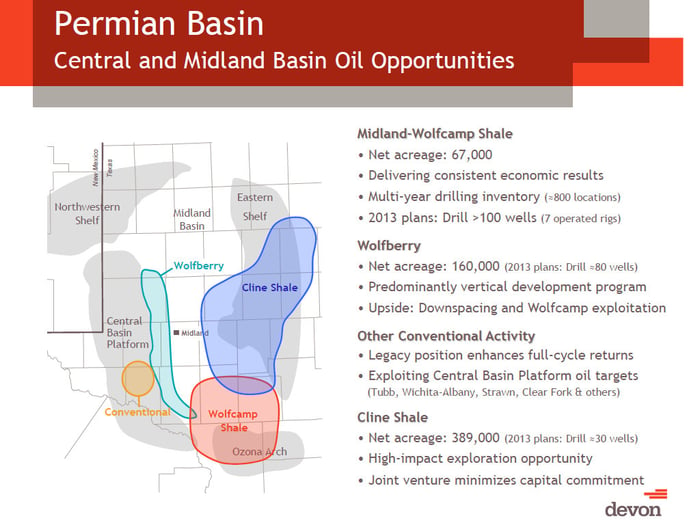 Another company to keep an eye on here is Apache Energy (NASDAQ:APA). The company has 520,000 net prospective acres in the Cline Shale. It estimates that it has 642 million barrels of oil equivalent of resource potential from 2,300 identified drilling locations. Apache is actively drilling: It added 11 horizontal wells in the first quarter and expects to drill 28 more wells this year.

Even if the Cline Shale doesn't live up to its lofty estimates, the Permian Basin has plenty of potential for investors. The play is really the gift that keeps on giving for oil producers. Take ConocoPhillips' (NYSE:COP) position in the play. The company has about a million net acres and is investing about $3 billion over its five-year capital plan to add about 40,000 barrels of oil equivalent production per day by 2017. After offsetting natural decline, that's a 7% annual production growth rate. In addition to that, the company is actively exploring emerging growth opportunities in the play including the Wolfcamp and Bone Spring.

Even producers focusing on legacy oil and gas production are finding the Permian Basin to be important for production growth. LINN Energy (OTC:LINEQ), for example, has built a significant position in the play over the past few years. It's deal for Berry Petroleum, which is soon to be closed, will double the company's drilling inventory in the Wolfberry Trend portion of the play. The company made its strategic entry into the Permian in 2009 when LINN thought it was simply accumulating long-life, low-risk, oil properties which could be added to over time. Luckily, the company has gotten that and more from the play and will have about 725 future drilling locations once it closes the Berry deal.

The Cline Shale might become the next big oil play since the Bakken, and if it does it could really help Devon in its drive to boost its liquids production. However, even if estimates for the Cline Shale prove to be too rosy, the Permian Basin itself should continue to deliver oily profits to producers and investors alike for years to come.