Shares of bankrupt AMR (NASDAQOTH: AAMRQ) -- the parent company of American Airlines -- have taken investors on a wild ride over the past six months. After spending most of 2012 well under $1, the stock rocketed higher, peaking above $7 a few weeks ago. Since then, shares have crashed again, briefly dipping below $4 on Thursday before closing the day at $4.40.

This extreme volatility highlights the excessive risk entailed in investing in a bankrupt company's stock. Many investors -- including myself -- thought that AMR shares would be worth little or nothing at the end of the company's bankruptcy proceeding. However, in February, the company announced that current AMR stockholders will actually receive at least 3.5% of the stock of American Airlines Group, which will be formed by the impending merger of American and US Airways (NYSE: LCC).

This news drove AMR shares up to nearly $3. However, the guaranteed recovery -- 3.5% of the new AAG -- would be worth only $385 million at the deal's official valuation of $11 billion. That works out to just $1.15 per AMR share. AMR shares have been driven far past this level because of a provision in the restructuring agreement that gives shareholders a chance to control more than 3.5% of the new stock -- but only if AMR's creditors are paid in full.

How much will shareholders get?
According to U.S. bankruptcy law, debt holders and vendors who have not been paid in full have the first call on any value left in the business. While these "unsecured creditors" have their claims prioritized over those of shareholders, they are not entitled to any upside from the bankruptcy reorganization. Thus, if unsecured creditors can be paid in full, current AMR shareholders would be entitled to any additional value.

There's a fairly complex formula governing how many shares of new stock will be issued to current AMR shareholders; fortunately, the company has provided a straightforward table (link opens PDF; see p. 486) laying out various scenarios. The upshot is that if shares of the new American Airlines Group are valued at more than $14.99, AMR shareholders will receive extra shares. The higher AAG's trading price, the more shares will be issued to AMR equity holders.

Bringing it home
US Airways shares will convert into American Airlines Group shares on a 1:1 basis, which means that the US Airways share price represents the best estimate of what AAG stock will be worth. At $15, AMR shareholders would be left out in the cold, with a measly recovery of just $1.15 -- but if US Airways shares rise to $18, AMR shares could be worth approximately $6 each. Since US Airways stock has traded anywhere from $14 to $19 in the past three months, AMR shares have been even more volatile. 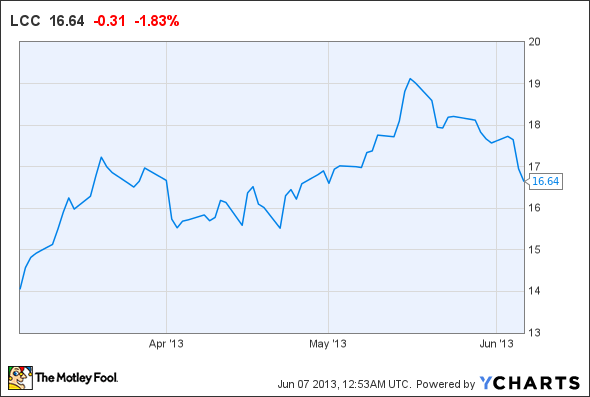 As I argued back in February, at $15, US Airways shares were already trading based on a generous valuation for the new American Airlines Group. Airline valuations have moved significantly higher since then, but it is unclear whether those moves are really sustainable.

If the scenarios laid out in AMR's disclosure statement are accurate, AMR shares would be worth roughly $3.83 based on US Airways' Thursday closing price of $16.64. US Airways shares could conceivably go higher before the merger goes into effect, but they could just as easily move lower. Extreme volatility is the price paid by AMR shareholders. As a result, this is a stock that most retail investors should avoid: the downside is too great to justify the potential upside.