Since 1980, the federal government has had a ban on any oil and gas development on the Atlantic coast. But the Bureau of Ocean Energy Management just announced that it will be auctioning offshore leases off the coast of Rhode Island and Massachusetts in July. If there is a ban on oil production, then why sell these assets? Well, the leases aren't actually for oil; they're for wind power.

Let's take a quick look at what BOEM has in store with this auction and how moves like this could change the outlook for wind power.

Setting course for the high seas
In July, BOEM will be executing the very first offshore auction of federal land for wind power. The auction will consist of about 165,000 acres in the Atlantic Ocean between Martha's Vineyard and Block Island. Once fully developed, the entire block should be capable of about 3,400 Megawatts of electricity, about 25% of the total wind capacity that was installed in 2012.

While this will be the first auction for wind power in federal lands, it's not the first time offshore wind has made a splash in the United States. For the past few years, the private project Cape Wind has attempted to build 468 MW of wind power in between the Massachusetts mainland and Nantucket island. The U.S. government has also granted a 96,000-acre permit to NRG Energy (NYSE:NRG) for its Bluewater wind project off the coast of Delaware. While neither project has started construction yet, both hope to get construction started by the end of this year to take advantage of the federal tax credits for new wind construction that will potentially expire in December.

Wind projects are considered attractive over onshore because offshore wind patters are generally stronger than those onshore. The following graphic from the National Renewable Energy Laboratory shows that offshore wind potential is much greater than even the most attractive onshore places in the United States. 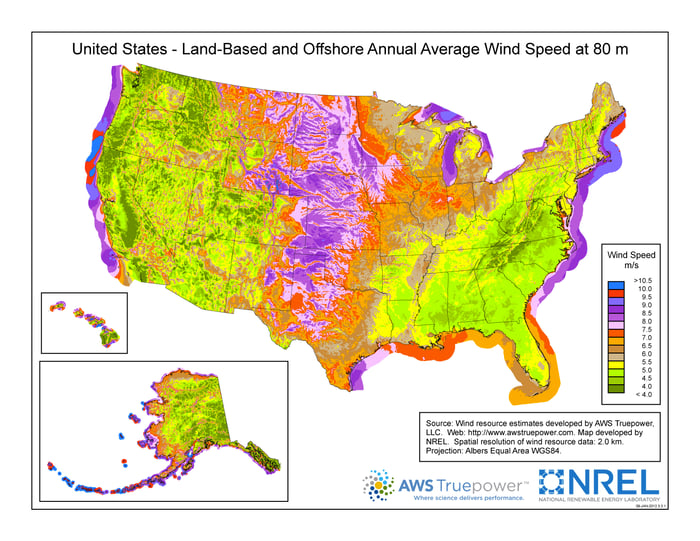 Based on the data from NREL, offshore wind has the potential to provide about 4,150,000 MW of electricity, almost four times the total generation capacity of the United States.

Despite the potential for these projects, they still face some very difficult challenges, both politically and economically. The Cape Wind project has faced several years of local debate that has caused several delays, and there is no sign that they will let up soon. The infrastructure required to build offshore wind is still cost-prohibitive, too. According to Joe Salvatore, an analyst with New Energy Finance, the costs to produce wind power offshore is approximately 21.8 cents per kilowatt-hour, nearly triple what it costs to produce from onshore generators. This is a major disadvantage today, but with per-watt costs for wind expected to reduce by 40% in the next 10 years, it is very possible that these offshore projects will become more economically feasible.

Getting a piece of the pie
While wind contributes only a portion of electricity generation capacity in the U.S. right now, it is also the fastest-growing energy source. In 2012, wind was responsible for 42% of new generation capacity. Unlike its renewable companion solar, though, there are very few ways to purely play the wind sector, because most of the major manufacturers are very diversified, and utility companies that mange wind facilities have a wide array of energy sources on its books as well.

For the upcoming auction in July, there are only a select few companies that intend to submit bids to for this auction, with French utility company Electricite de France and Spanish company Iberdrola the leading competitors. Also, despite being the lead company on the Delaware wind project, NRG Energy has only 300 megawatts of wind power, or 0.6% of total generation capacity, in its current asset portfolio.

Of the major wind turbine producers in the world, only General Electric (NYSE:GE) and Siemens (NYSE: SI) are publicly traded on the U.S. exchanges. Fortunately, they also are the two largest manufacturers in terms of U.S. market share. Combined, the two companies possess just over 58% of the U.S. wind turbine market. The two companies are also No. 1 and No. 3 in terms of global market share, with Danish company Vestas squeezing between the two in the global market.

From the generation side of things, there is no true wind-generation company that investors can get their hands on, either. The closest company to it is NextEra Energy (NYSE:NEE). As of April, the company had about 10,000 MW coming from wind power, about 56% of its net capacity. It's not done, either, NextEra intends to purchase 59 of GE's new 1.7 MW turbines, considered the most efficient turbines manufactured to date.

Not too far behind, though, are Warren Buffet's MidAmerican Energy, part of the Berkshire Hathaway (NYSE:BRK.B) holdings, and Atlantic Power (NYSE:AT). MidAmerican generates about 30% of its power via wind and plans to spend another $1.8 billion to increase that share to 40%. And while 804 MW of gross generation capacity on Atlantic's books may not sound that impressive, it still represents 22% of total generation capacity for the company.

What a Fool believes
While this offshore auction will hopefully add a nice boost to total wind-generation capacity down the road, there is a big hurdle approaching that could bring wind-power construction to a screeching halt. In December, several of the renewable-energy tax credits that wind has enjoyed for a while will expire. The tax credits were planned to expire at the end of 2012, and almost no new projects were started in the fourth quarter of last year as a result. 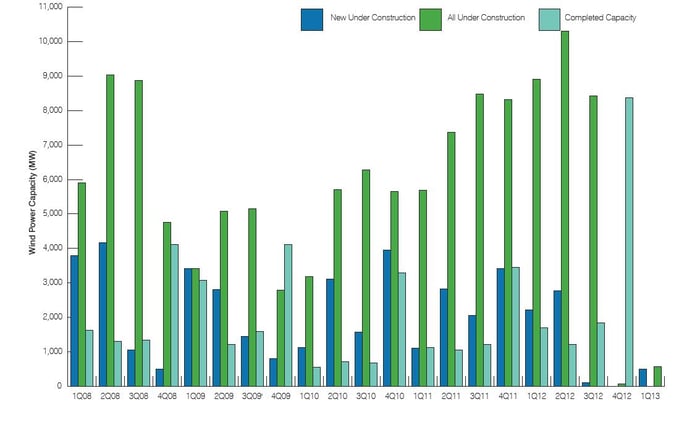 The one distinct difference is that in 2012 the project needed to be completed, whereas any project that starts construction by Dec. 31 has 10 years to complete it to get the tax credit. Will we see another big drop-off in wind activity at the end of 2013 like last year? The answer, my friends, is blowing in the wind.

The Winds of Change Are Upon Us @themotleyfool #stocks $GE $AT $BRK.B $NRG $NEE Next Article
Current