It's been shaky recently for the Dow Jones Industrial Average (DJINDICES:^DJI) and markets around the world. From the mounting concerns over the scaling-back of quantitative easing to downbeat projections of China's economic growth, a number of challenges to stocks' 2013 surge have arisen lately. Investors have become used to triple-digit swings in either direction from the Dow, but has this dramatic spate of volatility really shaken up the Dow? After all, the index has gained more than 16% year to date -- a number no one will turn down.

Let's compare the Dow against several major competitors around the world over the last month and a half to see just how well America's blue-chip stock index has weathered the storm.

The Dow easily tops competitors
Despite its wild swings over the last few weeks, the Dow has performed well in the recent past. While not comparable to its year-to-date gains, the index's nearly 3.7% rise since May 1 is a number that should look more familiar to most investors.

Even more surprisingly, the Dow has decisively beaten its competition -- including one of the best-performing indexes of 2013. 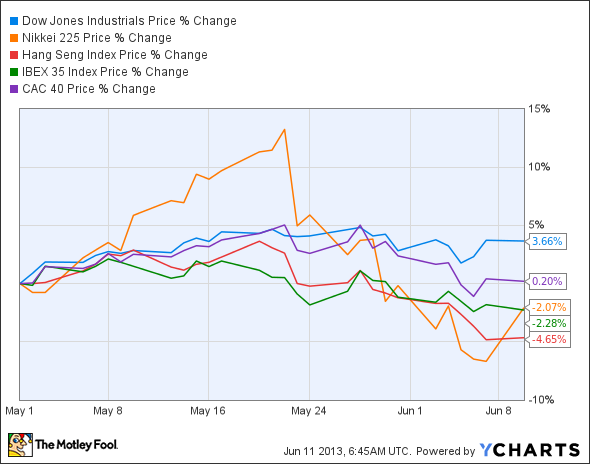 Japan's Nikkei (NIKKEIINDICES: ^NI225) has topped indexes around the world this year, but investors wouldn't know it by looking at its recent performance. One need look no further than the yen's fluctuations as the country's central bank tries to weaken its currency through stimulus. Financial stocks are the kings of volatility across the Pacific: Nomura Holdings (NYSE:NMR) has posted a whopping 129% gain over the past year, but over the last month the stock has performed horribly, losing more than 9%.

Japan's Nikkei will undoubtedly see more volatility in the future as stimulus continues, but the index may not repeat its earlier gains. Nomura investors and others in the Japanese financial sector will need to count on the markets to keep on rising. As with many in the sector, Nomura's revenue jumped sharply in early 2013 as the markets surged, and its business in Japan beat out international operations. Still, there are signs that the Nikkei is slowing: Nomura's vice president equity strategist Hisao Matsuura told Bloomberg in late May that much of the initial enthusiasm over Japan's stimulus has wound down.

Stocks in Japan have also been hurt by recent concerns over China's extended slowdownwhich haven't done Chinese markets any favors, either. While Hong Kong's Hang Seng (HSIINDICES: ^HSI) hasn't fallen so much as the volatile Nikkei recently, Chinese stocks will likely continue to struggle so long as lofty growth projections in China prove unrealistic.

The IMF recently downgraded China's growth from earlier estimates, and as the country's trade advantage-- which has helped to propel China's economic rise -- rapidly diminishes, Chinese investors could be in for a rough future. Unless American markets experience a drastic shake-up, the Dow likely won't have much trouble beating the Hang Seng in coming months.

More interesting is the performance of the stock indexes of some of Europe's most debt-plagued nations. While France's CAC 40 and Spain's IBEX 35 haven't measured up to the Dow and certainly haven't made investors happily, they've held off larger losses and beaten the Asian markets over the recent past.

That doesn't make either of these nations a safe bet for investors -- and especially not Spain, with its skyrocketing unemployment rate and bleak prospects for real economic growth in the near future. Still, that doesn't mean there aren't deals to be found among the best companies in these countries. Banco Santander (NYSE:SAN) has lost more than 11% year to date, but this financial firm has diversified well away from Europe's fiscal mess and toward developing Latin America, making the bank stock an intriguing emerging-markets play. With a massive 10.8% dividend yield and an optimistic earnings projection for the year, Santander isn't without appeal for investors. Still, Spain's risky economic situation makes nearly any stock from the country -- even a geographically diversified one -- a tough call.

For now, the American recovery makes U.S. stocks a safe option for investors -- and it makes the Dow a top index around the world.