Investors have short memories. Our recollections about five years ago are hazy. Ten years, and lessons are forgotten. Thirty years ago might as well have been the Big Bang.

Bonds have been in a 30-year bull market, so even some of the most grizzled professionals haven't experienced a prolonged period of pain. But history doesn't forget. The bond market has been here before. And it didn't end well.

Interest rates were kept incredibly low in the 1940s and 1950s to help manage the national debt after World 2. Ten-year Treasury bonds yield almost the exact same today as they did in 1950.

What happened to Treasuries after that? Those who held to maturity received their principal back. But inflation eroded all of the value of interest payments, and then some. And as interest rates rose in the 1970s, the value of existing bonds plunged. The result in real (inflation-adjusted) terms was three decades of sheer misery:

These losses might seem small, but they add up fast. $100 invested in 10-year Treasury bonds lost 40% of its value in real terms by the early 1980s: 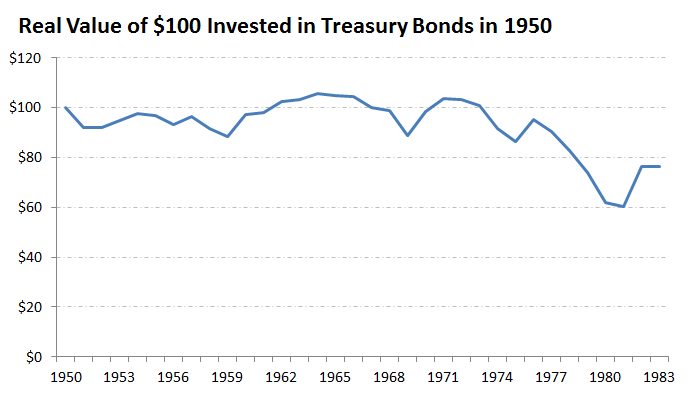 Inflation was out of control in the 1970s and early 1980s -- that wasn't a normal period by any means. But even before the inflation spike, those who purchased Treasuries in 1950s went 20 years without earning a penny in real terms. That's what you get for buying when rates are so low.

Short-term bonds might still make sense for those who need ready access to their money. For all else, the last century gives us a reasonable set of expectations going forward: Bonds are possibly a way to maintain the value of your assets, almost certainly not a way to grow them, and potentially a way to lose a lot of them.

Interest rates have risen over the last month, offering a taste. Pimco High Income Fund (NYSE:PHK) is down 10% in the last month. The Vanguard Long Term Corporate Bond Fund (NASDAQ:VCLT) lost 4.6%. Mortgage REITS sensitive to the same interest rate risk have been pummeled; Annaly Capital Management (NYSE:NLY) shares are off by one-fifth over the last year.

How bad can this get? It can't be stressed enough that we have no idea. Many investors thought Japanese bonds were toast in the early 1990s. Twenty years and dozens of ruined careers later, we're still waiting for the crash.

But when interest rates are this low, the best-case scenario becomes not getting hurt, and getting hurt becomes pretty likely.