It seems strange to hear two of the most successful blockbuster moviemakers in Hollywood history warning that the blockbuster-driven Hollywood system is due for a "meltdown." But that's just what Steven Spielberg and George Lucas put forth in a speech to mark the opening of a media center at the University of Southern California earlier this week. The prediction, which warned of overreach in the drive to create ever-larger tentpole productions, was just one of several bold prophecies offered by the two longtime friends and USC film alums (Spielberg gained an honorary degree in the '90s).

The wide-ranging speech also touched on moviemaking, video games, technology, and other related subjects that add up to a vision of the future of entertainment itself. Spielberg and Lucas have given the world some truly iconic depictions of the future -- even if one saga was set long ago in a galaxy far, far away -- so it's worth listening to what they have to say. Let's run through the big claims one by one.

Spielberg: A streak of bad blockbusters will destroy the cinema system.
Spielberg said:

You're at the point right now where a studio would rather invest $250 million in one film for a real shot at the brass ring than make a whole bunch of really interesting, deeply personal -- and even maybe historical -- projects that may get lost in the shuffle because there's only 24 hours. There's going to be an implosion where three or four or maybe even half a dozen of these mega-budgeted movies are going to go crashing into the ground, and that's going to change the paradigm again.

This seems like an odd thing to say, because we've already seen a stretch of abysmal box-office blockbuster bombs somewhat like what Spielberg's predicting, and none of the studios died as a result. The yowlingly bad Catwoman lost big on a budget of $100 million and Alexander barely broke even on its $155 million budget in 2004, and then 2005 saw two of the all-time biggest box-office losers as Sahara and Stealth combined to lose about $250 million. Time Warner's Warner Brothers released both Catwoman and Alexander but kept chugging.

The thing is, $250 million is a lot of money, but it's not the entire fortune of most media companies. Even the all-time record-breaking flop that was John Carter didn't do much to dent Disney's (NYSE:DIS) fortunes. That film came out 15 months (or five quarters) ago -- since that time, Disney's revenue is up 5%, its profit is up 15%, and its share price is up 50%.

Spielberg seems to be looking at the megablockbuster era as a sign that all the heaviest movie-making eggs are going into one flimsy basket. But DreamWorks Animation (NASDAQ: DWA) and the DreamWorks Pictures studio, both of which Spielberg founded, are pretty much exclusively film producers (with some TV shows). They do live or die (or near enough) based on the chance of a massive hit or a devastating flop. DreamWorks Animation has just two movies on its 2013 slate (one of which came out in March), and DreamWorks Pictures also has only two.

Meanwhile, Disney has seven more movies slated for release between now and the end of the year, but it also has several TV stations, a theme park empire, a video game studio, and a rather massive merchandising arm. Other major studios are similarly diversified. It would take a truly unprecedented streak of blockbuster flops to come close to sinking the blockbuster system, and studios are developing these films with the help of all the tools they can muster, including predictive data analytics. There is far too much invested in the current system's infrastructure for it to simply implode in a single season.

Lucas: The blockbuster implosion will turn movies into a Broadway experience.
Lucas said:

You're going to end up with fewer theaters, bigger theaters with a lot of nice things. Going to the movies will cost $50 or $100 or $150, like what Broadway costs today, or a football game. It'll be an expensive thing. ... [Movies] will sit in the theaters for a year, like a Broadway show does. That will be called the "movie" business.

Here's a quick comparison between Broadway and the movies:

And here's my answer to George Lucas: No. Just no.

You'd think the guy who pioneered the merchandising add-on for blockbusters would understand that successful merchandising strategies depend on having a lot of average people go see your movie. It will take an absolute sea change sweeping through the entire film industry to make the studios restructure their distribution strategies to cater exclusively to rich people.

Lucas: Everything that's not a blockbuster will be streamed on demand.
Lucas said:

Everything else [not a blockbuster] is going to look more like cable television on TiVo. It's not going to have cable or broadcast, it's going to be the Internet television.

This isn't so much prescient as it is an observation of reality. Netflix (NASDAQ:NFLX) has already distributed five original programs, including the critically acclaimed House of Cards and Arrested Development, as well as three special one-off programs and two original films. Four more series are slated for release by the end of next year.

House of Cards alone cost an estimated $100 million for two 13-episode seasons. Amazon.com will produce five original series for its Prime subscribers through its in-house studio, which has received over 15,000 movie script submissions and 3,600 series pilots since launching in 2010. The company is also developing 24 movies. Why exempt blockbusters? If a series can cost Netflix $100 million, it stands to reason that the company might eventually produce a movie at that cost or higher as well.

Lucas: The biggest video game of the future will be like Titanic.
Lucas said :

The big game of the next five years will be a game where you empathize very strongly with the characters and it's aimed at women and girls. They like empathetic games. That will be a huge hit and as a result that will be the Titanic of the game industry, where suddenly you've done an actual love story or something and everybody will be like "Where did that come from?" Because you've got actual relationships instead of shooting people.

The best-selling computer games of all time are The Sims, produced by Electronic Arts (NASDAQ:EA), which have been extraordinarily popular with women. Instead of shooting anything, you spend your time creating a little virtual life in a little virtual suburb, complete with a job and relationships to other little virtual people. Things like this will happen in The Sims: 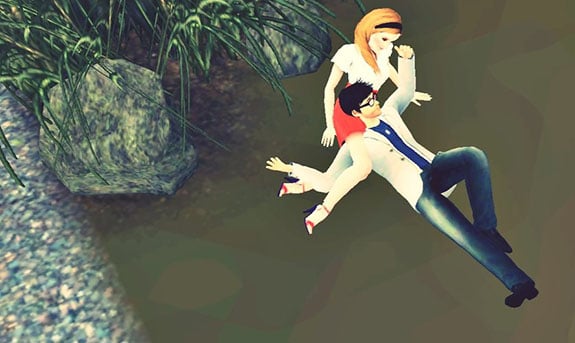 Ain't it cute? Certainly seems to meet the criteria for "actual relationships," at least in the confines of game programming. With 150 million copies of all its various games and expansions sold, The Sims seems to already be the Titanic of games. Again, Lucas seems a little behind the curve when it comes to anticipating positive entertainment trends. I've played The Sims 3 with a top-of-the-line computer, and it takes ages to get going once you start putting add-ons on top of the base game. In due time, I'm sure that EA or another game developer will make a game that's so engaging no one will want to come back to their real lives. Speaking of which...

Spielberg: We want a holodeck. Lucas: Let's control people's dreams!
The last comments were a bit far-flung. Spielberg started off with this:

We're never going to be totally immersive as long as we're looking at a square, whether it's a movie screen or whether it's a computer screen. We've got to get rid of that and we've got to put the player inside the experience, where no matter where you look you're surrounded by a three-dimensional experience. That's the future.

That, I think, is called a holodeck. Incidentally, Microsoft (NASDAQ:MSFT) is working on just this sort of technology, which was called "IllumiRoom" the last time it got some attention. Incidentally, Don Mattrick, Microsoft's Xbox chief, was part of the panel. There's no record of him making note of this, which is a bit surprising. Maybe the technology is still too far away from production.

Spielberg didn't set a timetable for his idea, but Lucas did:

The next step is to be able to control your dreams. You'll just tap into a different part of your brain. You're just going to put a hat on or plug into the computer and create your own world. ... We'll be able to do the dream thing 10, 15 years from now. It's not some pie-in-the-sky thing.

If you could create your own immersive, fully believable and fully customized world every time you closed your eyes, why would you want to open them again? You might as well plug yourself into the Matrix at that point. Does this mean that George Lucas just predicted the emergence of a voluntary Matrix? Seems a little bit scary, doesn't it?

What do you think of these predictions? Is there any meat to the claims, or are Spielberg and Lucas just blowing smoke? Let me know with a comment below.