By a lot, too. The Case-Shiller Housing Index is up almost 11% in the last year. Some cities are booming twice as fast. Los Angeles, Detroit, and Las Vegas home prices are up 20% in the last year. All of these are the biggest annual gains since 2006, when the housing bubble peaked.

We're not in a new housing bubble. Prices are bouncing off the deepest plunge since the Great Depression, and measured against rents and incomes, homes still look cheap. Bloomberg shared an amazing statistic this week: Detroit home prices are still so low that "it takes a mortgage rate of 35.8 percent to make renting more economical [than owning]."

But don't hold your breath for these gains to continue. 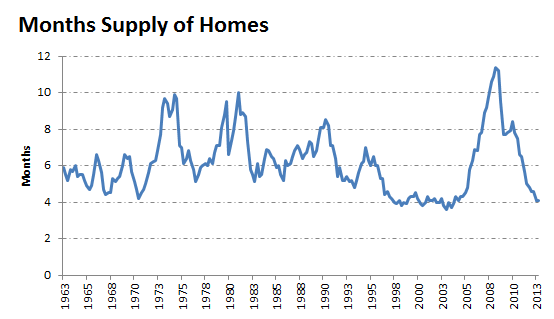 But two things happen when supply is this low:

1. Homebuilders have pricing power and are building again. They're constrained (amazingly) by labor shortages, but new-home construction is up 40% in the last year, and homebuilder confidence is at a seven-year high. As MDC Holdings (NYSE:MDC) CEO Larry Mizel put it earlier this year:

The opportunities have never been greater for the large builders. The capital markets are open and I would say in all the years I've been in business, this is probably the clearest period of time that I have seen as to the future of the housing industry for those who would have excess to capital.

Home construction is going to continue to boom. That's great for the economy, but it's going to add supply to the market and take some of the fuel out of rising home prices.

2. Millions of existing homeowners are gaining enough equity to sell. There are more than two million fewer homeowners underwater on their mortgages today than there were two years ago. As Redfin writes:

Increasing home prices are giving more sellers sufficient equity to sell, and sellers who already had equity are being lured into the market after seeing their neighbor's homes sell in record time and in fierce bidding wars.

More inventory begets more inventory, too. "I have several clients who are ready to take the plunge and list their homes -- they've even decluttered and we have the listing ready to hit the MLS," explained Redfin listing specialist Paul Stone. "The sellers are just waiting to get under contract on a home to buy, at which point we'll pull the trigger and list their current home."

This is going to push up supply, which should keep further price gains in check.

So how much should you expect the price of your home to rise over time? The answer might surprise you. Two years ago I sat down with famed Yale economist Robert Shiller. Here's a transcript of our talk on historical home prices:

Dr. Shiller: The housing boom in the early 2000s was driven by a sense that housing is a wonderful investment. It was not informed by good history. If you look at the history of the housing market ... Capital gains have not even been positive. From 1890 to 1990, real inflation-corrected home prices were virtually unchanged.

Dr. Shiller: I think it's a reasonable first approximation to assume that home prices will just keep up with inflation. There are concerns that they will do something different. People are very focused on the possibility that there will be another boom, which is possible if we are thinking over the tenure of one's ownership of a home, it's very hard to say what they will do, but I think we should also consider the possibility that home prices will decline in real terms over the next few decades.

Why is that? Well I think you have to reflect on the fact that it's done it before. Home prices declined for the first half of the 20th century in real terms. Economists discussed that back then. Why are they going down? The conclusion, if there was any consensus in say 1950, was ... of course home prices go down. There's technical progress. They are a manufactured good. Back in 1900, homes were handmade, you know, craftsmen. But now in 1950, we can get all kinds of power tools and prefab and they were just better in 1950 than we were in 1900, so of course they will go down.

From that frame of reference, I think maybe that's exactly what we should expect, too. It's just a manufactured good, and progress is always happening. And on top of that progress, there's the outmoding, the out-of-style factor. So what kind of houses will they be building in 20 years? They may have lots of new amenities. They will be computerized or something in some way that we can't anticipate now. So people won't want these old homes. To me, the idea that buying a home is such a great idea is just wrong. They may very well decline for the next 30 years in real terms.