The oil and gas trade rags are abuzz as April's production numbers have hit the press. Volumes are up in Texas' Eagle Ford and North Dakota's Bakken shale. Today we're going to look at North Dakota's numbers, whether the state's oil-by-rail trend has real legs, and what it could mean for your investments.

Production pop
North Dakota's oil production continues to climb, reaching an average of 793,250 barrels per day in April. That's about a 10,000 barrel-per-day jump over the March average, and a 33% pop over last year's number. Most of this production -- some 727,000 bpd -- is coming from the Bakken shale play. Continental Resources (NYSE:CLR) and Whiting Petroleum (NYSE:WLL) are the top two oil producers in the play right now.

Rail at the ready
The Bakken really kicked off the oil-by-rail phenomenon, and this trend continues to accelerate right along with production growth. In March, 71% of oil production left the Bakken on a train, and by April that figure had climbed to 75%. EOG Resources (NYSE:EOG) first put crude oil on a train back in 2009, and it has never looked back. The company sends 100% of its production out of the state by rail; Continental Resources puts roughly 80% of its production on trains. Not surprisingly, pipeline volumes fell over the same period, from 20% in March to 17% in April.

Oil producers are keen to use rail transport because it allows them to quickly access markets that aren't served by pipelines. These markets typically fetch a higher price for the crude than the traditional oil hubs served by pipelines, and though it's more expensive to ship by rail, it ends up being more lucrative in the long term. This trend is an economic one, with profits subject to the oh-so-volatile price of oil.

Shrinking spreads
Much of the success of railroads in the oil game was based around the difference in price of Brent crude and WTI crude. The bigger the spread, the greater the margin for oil refiners buying domestic crude. They'll pay a little more for crude to come in on a train because they know they'll make more refining it and selling it at the higher Brent price. If that spread shrinks, the advantage of shipping via rail shrinks with it, which is why some analysts are predicting that Bakken pipelines will start getting some love again.

Right off the bat investors should know that if this happens, one company in particular will see its earnings jump, and that's Enbridge Energy Partners (NYSE:EEP). The master limited partnership watched volumes on its North Dakota liquids pipelines shrink by nearly half in the first quarter, as producers favored rail shipments. If the pendulum swings back, we should see its numbers on this system follow suit.

With that in mind, let's look at the Brent-WTI spread year-to-date: 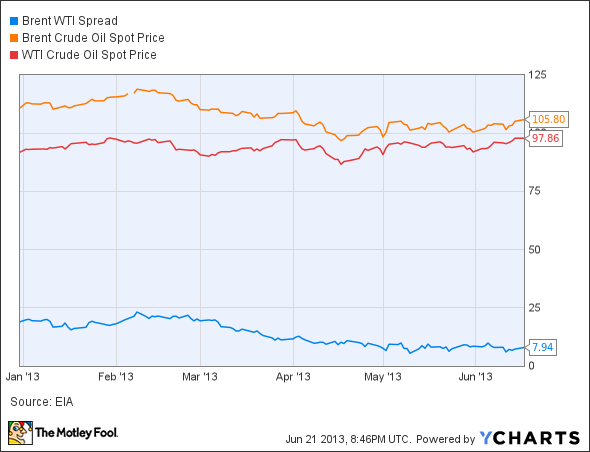 It's pretty clear that the spread has narrowed significantly from the middle of February, when it was just shy of $25, to right now, when it's just shy of $8.

Bottom line
North Dakota's rail capacity is about 800,000 barrels per day right now, while its pipeline capacity is only 583,000 bpd. Because of that constraint, it's unlikely we'll see rail disappear altogether, but we may very well see a rebalancing sometime in the near future.

Beyond that, it's important to know what happens to your investments when the price of oil rises or falls, but it's arguably much more important not to get caught up trying to predict when that will happen. We could wake up tomorrow to find that some geopolitical conflict has caused the price of Brent to soar -- you just never know. Instead, think about possible scenarios and pick the stocks that are most resilient, regardless of what actually ends up happening.