Which biotech companies are the best-run? That could be a difficult question to answer, since there are many perspectives on what constitutes a well-run company. However, I think there are a couple of key financial metrics that help narrow down the field quite a bit.

Return on invested capital, or ROIC, is perhaps the most important measurement from a shareholder's view. The number measures how effectively capital has been deployed. Another important metric is earnings growth. A company that does well consistently in both areas tends to be managed relatively well -- at least from an investor's perspective.

With these metrics in mind, here are the three biotech companies that stand at the top of the industry.

3. Biogen Idec (NASDAQ:BIIB)
Strong products including Avonex, Rituxan, and Tysabri powered Biogen Idec to success. The company boasts an ROIC over the past year of 18.8%, with a five-year average of 14.5%.

The biotech hasn't been a slouch when it comes to earnings growth, either. Biogen's earnings jumped 12% over the last year. Over the last five years, the company grew earnings by 74%.

Biogen is a granddaddy when it comes to biotech companies. It was founded way back in 1978. The company's current CEO, Dr. George Scangos, has led Biogen since 2010. Prior to that point, he was CEO of Exelixis and President of Bayer Biotechnology. Scangos has led Biogen to more than just strong financial performance. In 2011, a survey found that 96% of Biogen's employees were proud to to be associated with the organization.

2. Alexion Pharmaceuticals (NASDAQ:ALXN)
Alexion's focus on ultra-rare diseases has led to ultra-rare results. The biotech achieved a 15.1% ROIC over the past year. Its five-year average of 21.6% is even better.

Earnings growth has been stellar. Alexion's net income over a trailing 12-month window increased 49% during the last year. Over the past five years, Alexion saw earnings skyrocket by more than 460%.

The company's CEO, Dr. Leonard Bell, helped develop Soliris, which treats the rare diseases paroxysmal nocturnal hemoglobinuria and atypical hemolytic uremic syndrome. Bell co-founded Alexion in 1992 and led the company through its IPO four years later. He also was instrumental in Alexion gaining regulatory approval for Soliris and successfully launching the drug. Along the way, Alexion has received several honors, including being named the world's second-most innovative company by Forbes in 2012.

1. Questcor Pharmaceuticals (NASDAQ: QCOR)
The No. 1 spot belongs to Questcor. The biotech's one-year ROIC is a whopping 85.19%. Over the last five years, Questcor's average ROIC stands at 55.8%. That's quite impressive.

Questcor's earnings soared by 47% over the last year. The company grew trailing 12-month earnings by 375% during the past five years.

While controversy swirls around Questcor's ability to sustain these levels, there's no question that its management team has executed exceptionally well. The biotech bought Acthar gel from Aventis in 2001. Don Bailey joined Questcor as CEO in 2007 and led the effort to reposition Acthar as a drug used in the treatment of orphan diseases, including multiple sclerosis, infantile spasms and nephrotic syndrome. Questcor has since been named America's No. 1 small company by Forbes and received the 2012 Corporate Citizenship Award from the Child Neurology Foundation.

Honorable mentions
A couple of biotech companies came close to making our top three. Amgen (NASDAQ:AMGN) saw a 10.98% ROIC over the past year and has a five-year average of 10.7%. The biotech grew earnings by nearly 20% over the past year, but its five-year earnings growth of nearly 17% isn't as strong.

Celgene (NASDAQ:CELG) also performed well in our key metrics. The company's ROIC over the past year was 17%, but the five-year average of 4.1% dragged its overall ranking. Celgene's earnings growth of 432% over the last five years places the company high in the pecking order.

Well-run good runs
Do well-run biotech companies under our definition also have stocks that perform well? Take a look at the nice runs enjoyed by the top three companies and the two honorable mentions. 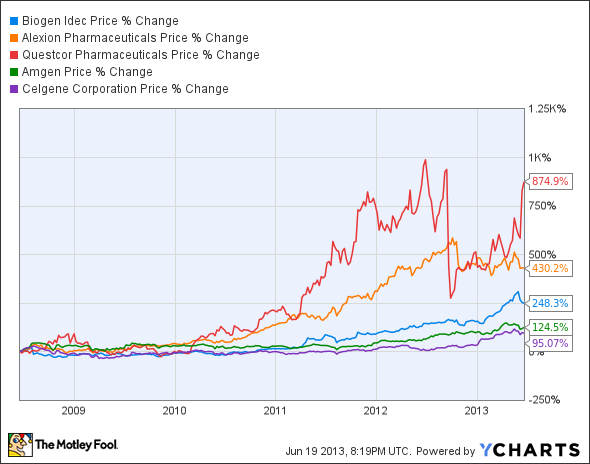 Questcor leads the pack by far, although the stock has exhibited considerable volatility along the way. The other top three biotech companies, Alexion and Biogen, have also seen strong share appreciation. Amgen and Celgene haven't done badly, either, with both stocks doubling or close to it over the past five years.

There's no guarantee, of course, that well-run biotech companies will always prove to be successful investments. Too many risks exist in the world of biotech that can bring a stock down quickly. However, generally speaking, biotech companies (or any company, for that matter) that consistently show strong ROIC and earnings growth tend to be good picks over the long run. The best-run companies often enjoy the best stock runs.