When fellow Fool Brian Stoffel made a pitch last month to buy Google (NASDAQ:GOOGL) stock and hold it for life, at least one Big G employee believes that could mean "forever."

If you think Google's self-driving cars and augmented reality glasses are cool, how does immortality sound?

The Edison of our time
Last December, Google hired one Ray Kurzweil to lead a variety of unique projects revolving around machine learning and language processing techniques. Kurzweil stated that Google's unique resources are allowing him to pursue his lifelong ambition of perfecting true artificial intelligence.

Of course, this kind of research has obvious applications in Google's wheelhouse, perhaps most notably by improving its core search competencies and peripheral products like its "Google Now" service, which Google made to more effectively compete with Apple's Siri voice assistant.

But what does that have to do with living forever?

Last week, Kurzweil appeared as a guest speaker at the second annual Global Future 2045 congress, a meeting of minds founded by Russian entrepreneur Dmitry Itskov, "focused on the discussion of a new evolutionary strategy for humanity aimed at overcoming the 21st century's civilization challenges."

In addition, the congress' website states, "The main science mega-project of the 2045 Initiative aims to create technologies enabling the transfer of a individual's personality to a more advanced non-biological carrier, and extending life, including to the point of immortality."

If you think that sounds a lot like James Cameron's blockbuster movie Avatar... well, you'd be correct.

In fact, Itskov's website at 2045.com doesn't shy away from the term, even providing the following "Avatar Project Milestones" for the initiative: 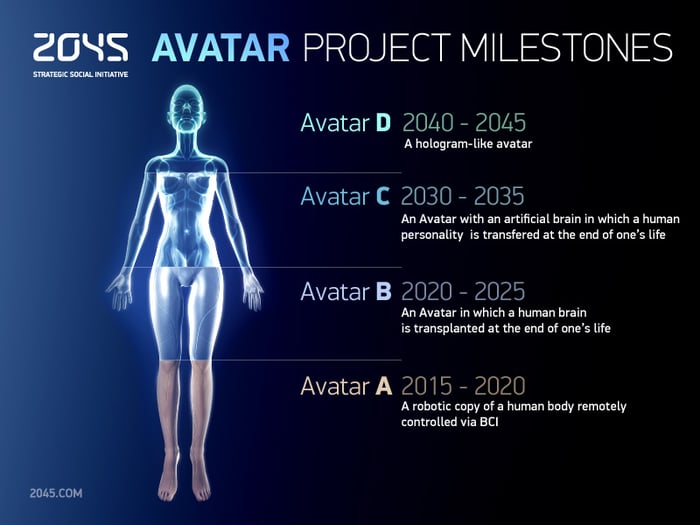 However, while Kurzweil's work in artificial intelligence and mapping the human consciousness have obvious applications for such an initiative, Kurzweil also believes medical advances may be able to progress fast enough to offset such a need. He said at the conference:

The life expectancy was 20 1,000 years ago. ... We doubled it in 200 years. This will go into high gear within 10 and 20 years from now, probably less than 15 we will be reaching that tipping point where we add more time than has gone by because of scientific progress. Somewhere between 10 and 20 years, there is going to be tremendous transformation of health and medicine.

Of course, that's nothing particularly new; Kurzweil said something to that effect to The New York Times in January, then reiterated his stance to The Wall Street Journal  again in April.

This time, however, Kurzweil went on to point out people have already made significant progress toward treating diseases and other ailments by approaching biology as an operating system, saying, "There's already fantastic therapies to overcome heart disease, cancer, and every other neurological disease based on this idea of reprogramming the software."

Of course, Kurzweil has never exactly made a habit of thinking small.

In fact, when 65-year-old MIT grad announced he was joining Google in December, he pointed out he was ironically criticized in 1999 when he predicted it would only take a decade before we would see technologies like self-driving cars and mobile phones that could answer our questions.

He also joked recently Google is actually his "first job -- at least for a company [he] didn't start."

Even so, something tells me Kurzweil wasn't particularly concerned about Google stock options. Prior to joining the company, he was busy writing books, inventing the world's first CCD flat-bed scanner, and creating omni-font optical character recognition. Kurzweil also invented the first print-to-speech reading machine for the blind, the first text-to-speech synthesizer, the first commercially marketed large-vocabulary speech recognition solution, and the first music synthesizer capable of recreating the grand piano and other orchestral instruments.

Along the way, he also picked up a National Medal of Technology, 19 honorary doctorates, awards from three U.S. presidents, and was inducted into the National Inventor's Hall of Fame by the U.S. Patent Office.

Why Google?
So why did Kurzweil join Google? Co-founding CEO Larry Page recruited him after he wrote How to Create a Mind: The Secret of Human Thought Revealed -- a book which focuses on "reverse engineering the brain to understand precisely how it works, and using that knowledge to create even more intelligent machines."

When Kurzweil told Page he wanted to start a company based on those ideas, Page convinced him to do it at Google, he says, because the "resources [he] would need were uniquely at Google."

More specifically, as Kurzweil said in an interview with Singularity Hub in March, he was looking forward to having access to Google-specific technology like its Knowledge Graph, which helps the company tie together more than 700 million different concepts with billions of relationships between them, all in the name of building a search engine which helps you find exactly what you want on the web.

Foolish final thoughts
If Kurzweil has anything to do with it -- and he most certainly does -- you can bet that's only the tip of the iceberg for how Google can apply its massive network of knowledge.

And who knows? A few decades from now, we may still be listening Kurzweil and his Google colleagues make new predictions -- only then they could be telling us how they helped us to live so darned long.

Of course, I'm not saying investors should go out and buy Google stock as a sure-thing immortality bet, but I will admit the mere fact that these sorts of forward-looking, big-picture ideas are even entertained at the search giant in the first place does make Google stock a compelling place for our investing dollars.