Investors in the fertilizer industry have something serious to think about. One of the leading nutrient producers, Agrium (NYSE: AGU), is hanging up on two expansion projects -- It has suspended development work on a greenfield project in the U.S. Midwest area, while dropping plans to expand an existing plant in Alberta.

They weren't just any plans. The projects would have added more than 30% to Agrium's annual nitrogen production capacity, which currently stands at 5.5 million tonnes. Nitrogen is Agrium's primary product and, as the most widely applied nutrient, has tremendous growth potential, particularly in the U.S. More than 50% of the nitrogen consumed in the U.S. last year was comprised of offshore imports. According to Agrium's recent investor presentation, 12 to 14 new nitrogen plants will be needed if the U.S. were to become self-sufficient. So why did Agrium back off its plans despite the opportunities? The answers might surprise you.

Problem of too many
One reason why Agrium put the projects on hold is similar capacity expansion plans by rivals. That might sound as if Agrium is giving in to peer pressure; yet, its concerns may be justified.

Some months back, closest competitor, CF Industries (NYSE:CF) announced plans to pump a massive $3.8 billion through 2016 on new nitrogen units in Louisiana and Iowa that will increase its nitrogen volumes by one-third from the current level. What's important to note is the location of these projects – the Midwest region. That's also where Agrium's greenfield project is based.

The Midwest is one of the most important markets for nutrient producers because of the strategic location of the Corn and Wheat Belts. A majority of CF's production and distribution facilities, including North America's largest nitrogen plant, are located in the Midwest. That means that CF already has a solid foothold in the region, and thus, better chances to capture an even bigger market through expansion than anyone else.

Agrium's real concern is that CF is just one of the many companies rushing to the Midwest belt. To name a few, Egypt's Orascom Construction Industries is betting $1.4 billion on a greenfield nitrogen facility in Iowa, while agricultural cooperative CHS is building a nitrogen plant costing more than $1 billion in North Dakota.

Even Mosaic (NYSE:MOS), which is primarily a potash and phosphate player, is planning to triple its key nitrogen compound, ammonia capacity in Louisiana. Though Mosaic currently consumes ammonia as input, I won't be surprised if it starts selling the nutrient commercially. Mosaic knows the business well, as it operated a nitrogen plant in Saskatchewan, Canada until some years back when it decided to exit the business to concentrate on other nutrients.

Who knows, one of these companies might even turn out to be Agrium's ally, because, according to Reuters, Agrium now wants to partner with someone to share the costs of the greenfield project. At the same time, it wants to secure input supply before proceeding with the plant. In other words, natural gas is the second factor that influenced Agrium's decision to hold up the project.

The trouble fuel
Natural gas is the key input for nitrogen. As gas prices plummeted last year, the number of fertilizer companies announcing capacity expansions surged. Agrium was one of them.

At current levels of around $4 per MMBtu, the U.S. gas cost is still among the lowest in the world, which is good news for Agrium. But, it is also the most volatile, as evidenced by the graph below. 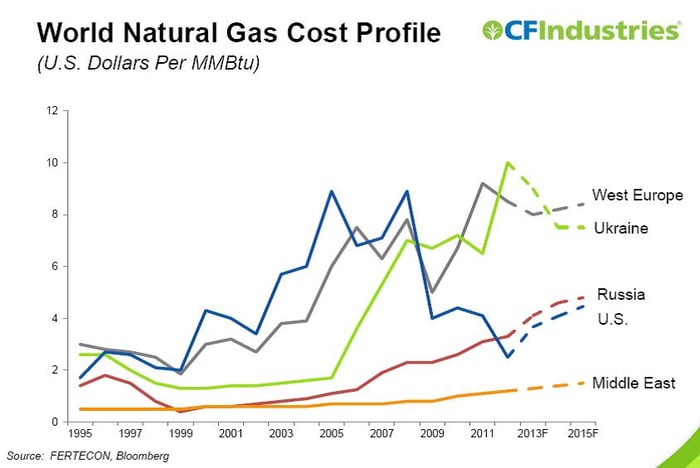 Given the volatility in gas prices, Agrium's concerns are justified. It consume  32 to 38 per million British thermal units, or MMBtu, of natural gas to produce one tonne of ammonia. Every rise in gas prices, even if small, could add significantly to the company's costs. That's why Agrium wants to sign a long-term gas supply contract before setting up a new plant. Methanol maker Methanex recently made a similar move by striking a 10-year gas supply deal with Chesapeake Energy for its plant in Louisiana. CF's largest plant at Donaldsville is already well-connected to five gas pipelines, which can meet the requirements of its upcoming plants. Agrium seems to be taking a leaf out of these companies' books, and rightly so.

All's not lost for Agrium
Interestingly, while deferring plans on nitrogen, Agrium is upbeat about its ongoing potash expansion project at Saskatchewan. Once complete, Agrium's annual potash production capacity of 2 million

tonnes will increase by 50%. Production is expected to go online by the latter half of next year, at about the same time when peer PotashCorp (NYSE:POT) will have completed its major expansion program that will double its annual potash capacity to 17 million tonnes.

Ironically, while Agrium is optimistic about potash, Mosaic recently pushed back potash expansion plans in favor of phosphate. But if the International Fertilizer Industry Association's projections are anything to go by, Agrium could well be on the right track. According to the IFA, global demand for potash is expected to grow at an average rate of 3% through 2017, compared to 1.8% for phosphate, and 1.5% for nitrogen.

The Foolish bottom line
If Agrium can't find suitable investment opportunities, it plans to return the extra cash to shareholders in the form of buybacks. The company might even increase dividends. Its current dividend yield at 2.3% is considerably lower than the 3.6% dividend yield that PotashCorp offers.

Investors still have a lot to look forward to, even if Agrium defers some expansion plans. The company is well diversified, is growing its seeds and crop protection businesses, and is expanding into high-potential markets like Canada and Australia. As the world population grows, so will Agrium's opportunities.