Investors love stocks that consistently beat the Street without getting ahead of their fundamentals and risking a meltdown. The best stocks offer sustainable market-beating gains, with robust and improving financial metrics that support strong price growth. Does Apple (NASDAQ:AAPL) fit the bill? Let's take a look at what its recent results tell us about its potential for future gains.

What we're looking for
The graphs you're about to see tell Apple's story, and we'll be grading the quality of that story in several ways:

What the numbers tell you 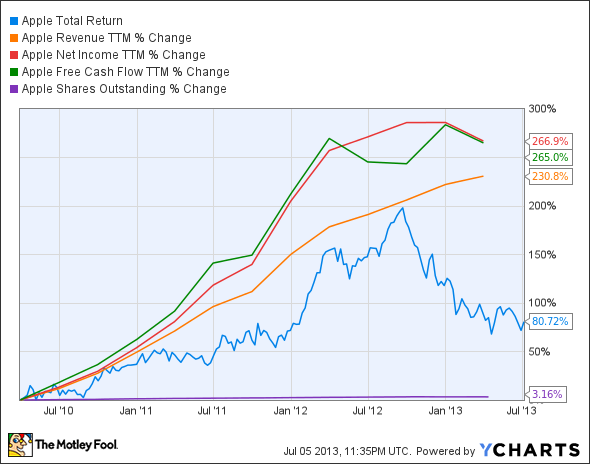 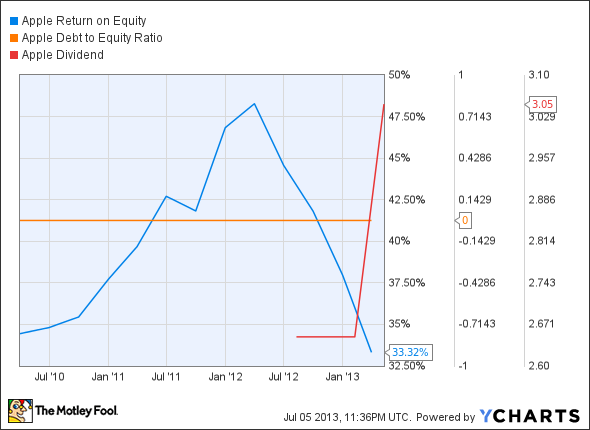 How we got here and where we're going
Apple doesn't quite come through with the flawless performance we might expect, as it's only earned seven out of nine possible passing grades. However, one of those failing grades only happened due to the narrowest underperformance -- free cash flow has certainly grown substantially along with net income. Even if Apple does flip that script when we examine it next, a massive debt raise (which hasn't yet been recorded in SEC filings) will certainly cost it the debt-to-equity passing grade it earned this time around.

Despite promising revenue and earnings growth, the stock has dipped more than 40% from a peak last September. The main reason appears to be that the company's critical product, the iPhone, has lost its edge, and the product cycle that drove Apple's mind-boggling profitability over the past several years is nearing an end. At least that's what anti-Apple chatter would indicate. Can the Apple bear be killed? Let's dig a little deeper.

Apple has a history of cranking out revolutionary products and then creatively destroying them with something better. It enjoys 90% retention rates among its customers, which is really unique in the history of consumer products. However, the company cannot sustain its high profit margins as the competition in the tablet and smartphone markets forces the company to compete at lower price points. Since the iPhone 5's release last year, Apple's stock collapsed due to a combination of supply issues, increased competition, patent lawsuits, executive shakeups, and perhaps most importantly, a concern among investors that the company may not have another breakthrough product up its sleeve.

Despite the negative sentiment currently surrounding Apple's stock, the company still has a stronger position across smartphones, tablets, and PCs than any of its competitors. That's a testament to Apple's ability to create "halos" around its products, which turns first-time Apple buyers into long-term Apple customers. Considering shares currently trade at a P/E around 10, well below its competitors' average of about 15, Apple stock investors may be dramatically undervaluing the company's ability to create customers for life.

At this year's Worldwide Developers Conference, Apple announced iWork for iCloud, a direct competitive volley against Microsoft (NASDAQ:MSFT) and (to a lesser extent) Google (NASDAQ:GOOGL) in cloud-based productivity software. Chipping away at Microsoft's long-standing dominance with Office would go a long way toward eliminating the Windows-maker as a significant competitive threat in the mobile world. More recently, Apple partnered with Time Warner's (NYSE:TWX) HBO GO and Disney's (NYSE:DIS) WatchESPN to allow its TV set-top box users access to more diverse on-demand content. Even though Apple has come under significant pressure as the mobile space saturates, its shares are still worth looking into at today's prices.

Putting the pieces together
Today, Apple has many of the qualities that make up a great stock, but no stock is truly perfect. Digging deeper can help you uncover the answers you need to make a great buy -- or to stay away from a stock that's going nowhere.