As shares of Apple (NASDAQ:AAPL) dropped from more than $700 to less than $400 between September 2012 and April 2013, investors' concerns about the company multiplied rapidly. From a psychological perspective, this is not very surprising. While Apple stock was running up from less than $400 in late 2011 to its peak around $700, it was natural for investors (including me) to gloss over some of the company's weaknesses. 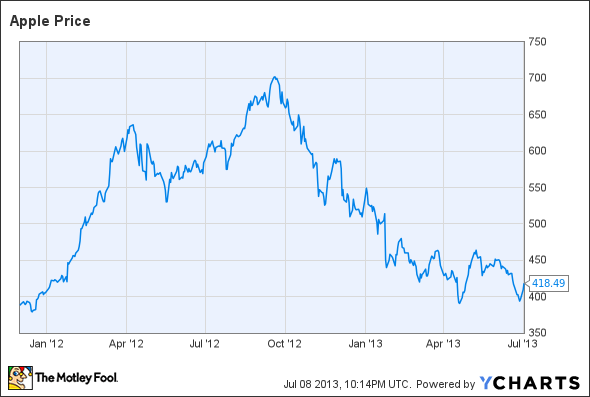 By contrast, during its recent fall, Apple's flaws have come into clearer focus, and many people seem to have forgotten that it is still one of the most profitable companies in the world. A recent article in Fortune tried to take an even-handed approach, but still concluded that Apple has peaked. Author Adam Lashinsky argues that the company is "following" competitors with its new products and services like iTunes Radio, iOS 7 and possibly an iWatch.

In the midst of this chaos, an incredibly simple fact often gets overlooked: Even if investors were overly optimistic about Apple's prospects when they drove the Apple stock price up above $700 in September, isn't it very likely that the company is dramatically undervalued in the low-$400 range? That's what I concluded, which is why I significantly increased my position in Apple late last month.

Has Apple really peaked?
The debate about whether Apple has "peaked" makes for some very interesting theater, but can sometimes obscure more than it reveals, especially from an investing standpoint. There are two key points that investors should keep in mind when considering the future prospects of Apple and its stock.

The first point to consider is that it takes a good deal of hubris for analysts and other bystanders to proclaim that innovation is dead at Apple. While investors have become accustomed to the idea that leaks in the supply chain will give plenty of advance warning regarding Apple's plans, outsiders cannot really be sure of what the company is working on.

At most, one could argue that Apple has not debuted any innovative products since Steve Jobs died. However, there was a gap of more than five years between the iPod's debut in late 2001 and the announcement of the iPhone in early 2007. During that time, the company created lots of variations on the iPod (and iMac), but nothing truly "new."

Somebody who thought in 2005 that Apple had stopped innovating was proven wrong in dramatic fashion. However, the idea that Apple had peaked would never have even come up in 2005, simply because Apple stock traded for less than $40 back then. Apple just wasn't a big deal in 2005, whereas today it is constantly under the microscope.

A second point to consider is what people really mean when they speculate about whether Apple has peaked. If people are measuring the distance between Apple and competitors, then it is probably true that Apple has peaked. Apple was so far ahead of competitors in the smartphone and tablet arenas -- two humongous addressable markets -- by mid-late 2010 that it would be hard to replicate that dominance. For example, Apple had a staggering 71% share of smartphone profits in 2011.

However, if the question is whether Apple's earnings power has peaked -- and this is the key question if you're thinking about whether or not to buy Apple stock -- the answer is "probably not." Indeed, despite all of the pessimism surrounding Apple today, analysts still (on average) expect the company to grow revenue by more than 9% and EPS by more than 10% next year. That would still leave Apple's EPS a little below the record high it achieved in 2012, but any new product lines (or even higher-than-expected share repurchases) could lead to record EPS next year.

The big takeaway is that even if Apple never reopens its lead in the smartphone or tablet markets, and even if it never creates a new product that takes the world by storm, there is still room for the company to resume earnings growth by fully exploiting existing opportunities. One example is the often rumored idea of building a lower-cost iPhone that could be affordable to the middle class in developing countries.

Beyond a bargain
When I stated in the introduction that Apple stock's rapid decline from $700 to less than $400 seemed overdone, that actually underestimated the depth of the company's fall. From an enterprise value standpoint -- which adjusts for debt and excess cash to determine the value of the underlying business -- the drop in Apple's value was much steeper. After deducting Apple's cash, the company's enterprise value peaked at nearly $550 billion last September. As recently as late June, that had fallen nearly 60% to $225 billion.

Moreover, Apple has announced a big increase to its share repurchase program in the interim, raising confidence that excess cash will gradually be returned to shareholders through dividends and repurchases. That means that investors have less reason to discount or ignore the company's cash when determining Apple stock's proper value.

Could the Apple enterprise really be worth just $225 billion? Analysts currently expect Apple to earn over $37 billion for FY13, compared to last year's record earnings of $41.7 billion. Apple's enterprise valuation therefore bottomed at just six times earnings last month, and still sits well below seven times earnings. That represents a discount to the valuation of Hewlett-Packard, a company that has gone through much more turmoil over the last two years, and it represents a significant discount to Dell's current valuation.

In short, the recent Apple stock price only makes sense if you believe that the company's earnings will continue declining. However, it's important to note that while earnings declined this year, revenue growth continued. The earnings decline was entirely driven by lower gross margin. The bulk of the evidence points to this margin contraction being one-time in nature, not a long-term trend.

Foolish conclusion
If you believe that bargains do arise in the stock market, Apple stock today fits the bill. The company may not be as far ahead of competitors as it was two or three years ago, but it still has a unique brand name that provides an enviable moat. Moreover, despite a margin "correction," the company is still on pace to earn net income of approximately $37 billion this year.

Yet for all these advantages, Apple stock can be bought for less than seven times earnings (if you exclude the company's cash). Could something go wrong for Apple investors? It's always possible; the technology landscape can change rapidly. However, Apple provides a generous margin of safety for value investors -- enough to make me feel comfortable upping my holdings.