Investors love stocks that consistently beat the Street without getting ahead of their fundamentals and risking a meltdown. The best stocks offer sustainable market-beating gains, with robust and improving financial metrics that support strong price growth. Does WWE (NYSE:WWE) fit the bill? Let's take a look at what its recent results tell us about its potential for future gains.

What we're looking for
The graphs you're about to see tell WWE's story, and we'll be grading the quality of that story in several ways:

What the numbers tell you
Now, let's take a look at WWE's key statistics: 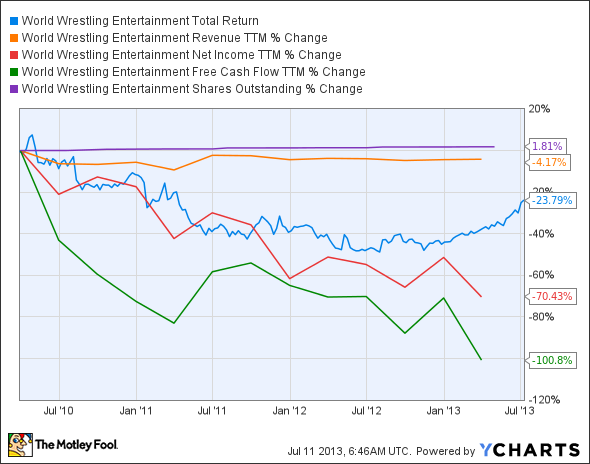 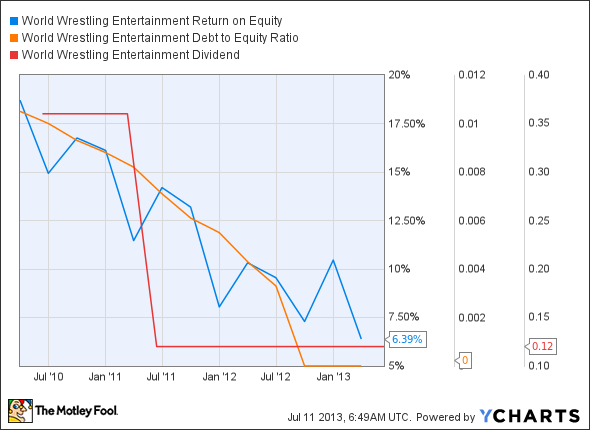 How we got here and where we're going
World Wrestling Entertainment, or WWE to its shareholders and fans, takes a big piledriver to the mat in this assessment, as it earns only one of nine possible passing grades. A big source of that weakness is the company's falling free cash flow, which has resulted in slashed dividend payments, and may result in more cuts to come if it can't return to positive territory. Will WWE be able to kick out of the three-count, or is it done for? Let's dig a little deeper to find out.

Entertainment companies are powerhouses of intellectual property, and they are able to draw on decades of characters, and make profits even during bad times by rehashing old stories or rereleasing old material. When WWE has a big hit on its hands, it can virtually mint money. Unfortunately, that hasn't been much the case lately, as the company's biggest promotion over the past year was the return of former superstar and current movie star The Rock, who can't be expected to headline live events all the time as his star continues to rise in Hollywood. As the de facto kingpin of synthetic athletic contests, WWE has a pretty solid moat, but there's always a risk of viewer apathy, as has occurred several times in the past.

WWE hasn't given investors the gains they've hoped to see for quite a while, but the company hasn't given up on its growth efforts. WWE Main Event was launched last summer on the ION network, complementing its deals with Comcast to broadcast Raw and Smackdown. It also launched a kids-focused show on the CW network, Saturday Morning Slam, as part of an agreement with CBS and Time Warner. WWE Studios and Warner Bros are also coming together to co-produce a Flintstones animated movie, to be released in early 2015. This animated feature will allow WWE to promote its brand with young fans and loyal Flintstones enthusiasts alike, at least in theory. It's tough to say how pro wrestling would be integrated into the story without appearing to be a blatant gimmick. Warner Bros will handle the worldwide distribution, while WWE will market the release of the film.

WWE shares have surged some 30% since June 2012 in anticipation of a Rock-driven pay per view season, and the People's Champ didn't disappoint -- the 29th iteration of WrestleMania grossed a record $72 million. Television revenues also rose by 15% on a year-over-year basis, aided by an additional hour of the Raw program. Wrestling goes through phases of higher and lower popularity, and it seems that it's been on the lower end of the sine wave since the last generation of superstars stepped aside. If the faux sport's popularity stays low for awhile, the overhead of music and merchandising may weigh the company down into losses. The McMahon family's headlock on voting rights will also hinder any potential changes in direction, which could be worrisome if the company fails to get the public to smell what it's cooking again.

Putting the pieces together
Today, WWE has few of the qualities that make up a great stock, but no stock is truly perfect. Digging deeper can help you uncover the answers you need to make a great buy -- or to stay away from a stock that's going nowhere.