The Dow Jones Industrial Average (DJINDICES:^DJI) is slightly higher following some mixed reports on the economy. Boeing (NYSE:BA) is leading the Dow today as initial reports indicate that Friday's Dreamliner fire was not caused by the plane's battery. As of 1:15 p.m. EDT the Dow is up by 0.12% to 15,483 points, while the S&P 500 (SNPINDEX:^GSPC) is up 0.12% as well to reach 1,682.

The key figure is retail sales, which suggest a slowing economy. Retail sales were up a seasonally adjusted 0.4% in June, slower than May's 0.5% growth and analyst expectations of 0.9% growth. Year over year, retail sales are up 6%. 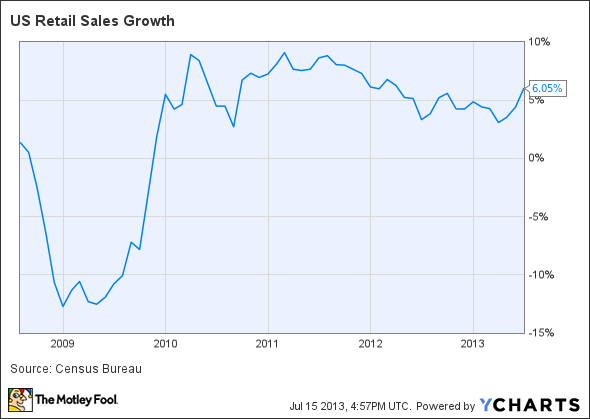 Retail sales growth looks worse if you exclude motor vehicle and parts sales, which makes for no growth in June versus 0.3% growth in May. Excluding motor vehicle and parts sales, economists had expected 0.6% growth, so this was indeed a weak report. Spending on automobiles has been one of the fastest-rising segments of the retail economy, rising 8.3% in the past 6 months. The only retail sector to grow faster has been nonstore retailers, whose sales have grown 11.2% in the past six months. Nonstore retailers don't have physical locations and include online retailers, direct-response sellers, infomercial companies, etc.

Today's Dow leader
Today's Dow leader is Boeing, up 3.2%. Last week Boeing was the worst-performing Dow stock, down 4.7% on Friday and 2.3% for the week after a Dreamliner 787 caught fire on the ground at London's Heathrow Airport, stoking fear that the Dreamliner's battery problems weren't behind it. If you recall, at the beginning of the year the Federal Aviation Administration grounded the Dreamliner after indentifying the plane's lithium battery as the source of a series of small fires on the jets. After Boeing fixed the problem, the FAA allowed it to resume deliveries in May, and the stock is up more than 10% since then.

On Friday, a Dreamliner operated by Ethiopian Airlines caught fire while parked. However, early reports from the U.K.'s Air Accidents Investigation Branch showed there was "no evidence of a direct causal relationship" between the fire and the lithium batteries. Continued problems with the battery would have been a setback for Boeing, but with this false alarm behind it the company can continue to reap the rewards of its investment in the new jetliner.