These days, Microsoft (NASDAQ:MSFT) mostly wants to be like Apple (NASDAQ:AAPL) -- everything from entering first-party tablet hardware to becoming an integrated devices-and-services company to a major internal restructuring. Well, the Mac maker might now be looking to follow in the software giant's footsteps for a change.

PrimeSense offers technology that allows devices to process scenes in three dimensions, which it refers to as depth sensing. 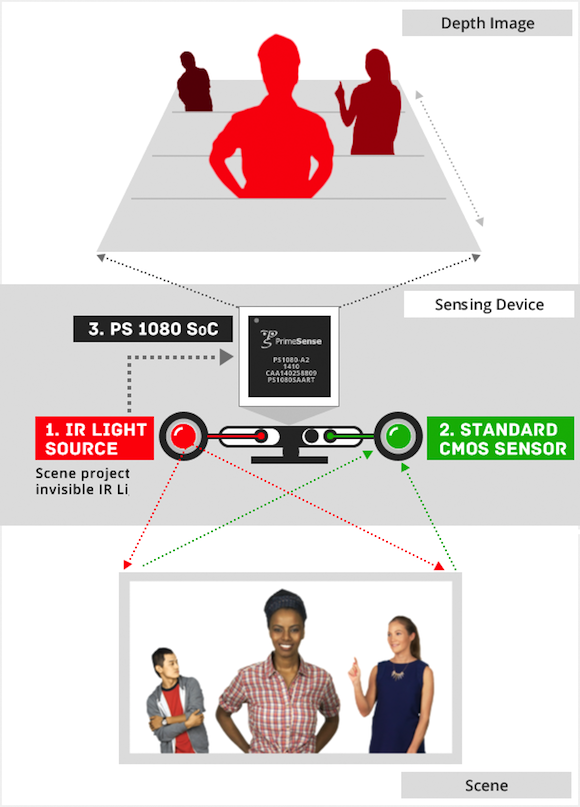 The company serves a wide range of markets, including the PC market with a device made by Asus, but Kinect is easily the most widely recognized and popular implementation. In February, Microsoft said it had sold 24 million Kinect units to date.

Negotiations are supposedly still in early stages. Apple has been growing its presence in Israel following its acquisition of Anobit in 2011. Since then, Apple has set up numerous research and development facilities in the region as well.

Microsoft and Apple are on the same interface page
One of the most obvious potential applications Apple may be pursuing is gesture controls for its long-rumored Apple TV. The current Apple TV remote is so simplistic that it's difficult to use. Entering text with a directional pad is cumbersome, but Apple may not want to jam an entire keyboard onto a remote since that was one of Google TV's criticisms.

Apple's biggest successes in the past have all centered on interface breakthroughs (graphical interface on the Mac, click wheel on the iPod, and touch on the iPhone/iPad), and the TV usage model is in need of help in this department. A touchscreen remote would solve one problem with buttons that contextually change. Combining that with voice and gestures could be the key.

Microsoft has already taken note of this, as the company is positioning Xbox One as the central entertainment hub of the living room, and embracing gesture and voice controls as well as second screens like SmartGlass.

Both Apple and Microsoft face daunting challenges with the TV industry, though. Microsoft is partnering with existing cable operators for live TV service for existing paid subscribers. The Xbox One will use HDMI pass-through and become a glorified remote. Of course, Apple has nothing to share officially, but rumors point to a similar arrangement where the Apple TV will serve existing Time Warner Cable subscribers, although the level of integration may be greater.

If the shoe fits
There's also been some interest in gesture controls in other computing devices. Samsung's been making a push with gestures in its Galaxy S4, although those interactions are served up by Synaptics hardware. Leap Motion has an interesting little dongle that sits in front of a monitor and sensing hand movements, which is set to ship later this month.

If the future of interface truly lies in gestures, it makes a lot of sense for Apple to acquire PrimeSense, which fits the bill as a small company with innovative technology that can be integrated into future products and costs about $500 million or less. It also helps that PrimeSense has an extensive patent portfolio.