On Monday, Krispy Kreme Doughnuts (NYSE: KKD) announced its board has approved the repurchase of up to $50 million of the company's common stock, effective immediately.

For those of you keeping track, remember that Krispy Kreme already completed a $20 million share repurchase program last fiscal year, and Monday's press release optimistically states they "view this $50 million additional repurchase authorization as a further indication of Krispy Kreme's financial strength, our outstanding free cash flow generation, and our positive outlook for the future."

Out of the pan...
To be sure, while the doughnut-maker's revenue in the most recent quarter increased 11.2% year over year, to $120.6 million, adjusted net income rose an even more impressive 37%, to $14.1 million during the same period. This was primarily a result of reduced operating expenses and solid 11.4% same-store sales growth. Meanwhile, GAAP net income also rose by a third, to $8 million.

Better yet, thanks to those strong first-quarter results and expected continued strength for the remainder of the year, Krispy Kreme raised its fiscal 2014 outlook for adjusted net income to between $42 million and $45 million, up from the previous forecast of between $37 million and $40 million. In all, they say, this should help boost its fiscal 2014 earnings per share by between 26% and 34% over fiscal 2013.

In addition, this week's release also noted that the company retired the remaining $22 million balance of its term loan as part of a refinancing of its existing secured credit facilities, which should save Krispy Kreme around $1 million in interest over first year following the transaction.

...and into the fire?
But with shares of Krispy Kreme currently trading at a whopping 59 times last year's earnings -- and that's including a 4% drop so far in today's trading -- does this buyback really make sense?

After all, while the company's results have been strong, remember that Krispy Kreme stock has more than doubled so far in 2013, and stands at more than triple its levels from this time last year. All in all, the stock has handily beat the broader index's returns since then: 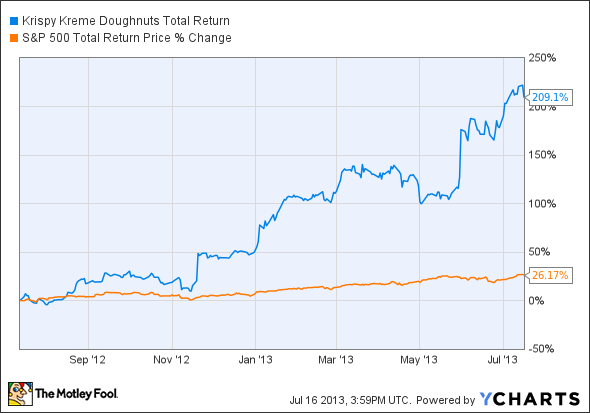 And yes, I'll admit Krispy Kreme's forward price-to-earnings ratio is a much more manageable 26.6, but that's also assuming Krispy Kreme's plans go off without a hitch.

Company Chairman and CEO James Morgan did chime in, however, to assure investors they "always seek to first deploy cash to grow the business, [but] will complement that usage, as appropriate, with other means of increasing shareholder value."

Buybacks can create value, but...
To that end, if Krispy Kreme doesn't have anything better to do with its money, why not give investors the option of choosing what to do by initiating a dividend?

Of course, that doesn't mean share buybacks don't have their place; back in February, I supported iRobot's (NASDAQ:IRBT) plan to repurchase up to $25 million of its common stock, but that was only because the company had just taken a beating after an ugly fourth-quarter earnings report, and I also believed its shares were fundamentally undervalued relative to its growth prospects.

Sure enough, shares of iRobot have risen 85% since then on the heels of a great follow-up quarter, which beat even iRobot's lofty expectations, and this thanks to the strong performance of its fast-growing consumer segment. However, while I continue to hold my shares of iRobot today, if the company came out now to announce a fresh repurchase program on top of its existing authorization, I'd be forced to respectfully disagree with their decision.

Or take Warren Buffett, who told investors last year he'd be willing to repurchase shares of Berkshire Hathaway (NYSE:BRK.B)(NYSE:BRK.A). The catch? He would do so only if the stock was trading below 1.2 times book value -- the price at which he believed it represented a fantastic bargain. In fact, last December, he did just that by repurchasing $1.2 billion in Berkshire stock at around 1.16 times book value from the estate of an unidentified longtime investor.

And you know what? If Buffett had it his way, he would have bought it even cheaper; remember, that self-imposed limit of 1.2 times book was actually raised from Buffett's previous limit of 1.1, which he says simply proved an unrealistic level at which nobody was willing to sell.

Foolish takeaway
Long story short, though buybacks can create shareholder value when executed at the right price, I have to agree with fellow Fool Sean Williams, who asserted last year that, by and large, investors generally get duped by most share repurchase plans.

In the end, then, while I'd love to give Krispy Kreme the benefit of the doubt, I just can't get behind this buyback.

Is Krispy Kreme About to Throw $50 Million in the Fryer? @themotleyfool #stocks $BRK.A $BRK.B $IRBT Next Article
Current