The Dow Jones Industrial Average (DJINDICES:^DJI) is up after Bernanke continued his congressional testimony, the weekly new unemployment report came in better than expected, and the positive earnings reports continued. As of 1:20 p.m. EDT the Dow is up 64 points, or 0.41%, to 15,534. The S&P 500 (SNPINDEX:^SPX) is up 37% to 1,687. 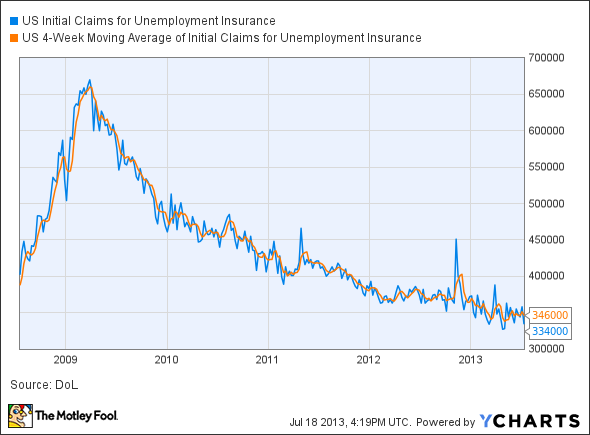 The other economic report today was the Conference Board's Leading Economic Index for the U.S., which remained unchanged in June at 95.3. The index is made up of 10 indicators and is designed to signal peaks and troughs in the business cycle. The large drop in building permits that we saw yesterday was offset by the large spread between the 10-year Treasury and the federal funds rate, a rise in the leading credit index, and the drop in weekly initial unemployment claims.

The federal funds rate is the rate at which banks can borrow from the Federal Reserve; it's currently set at 0.25%. The Fed has been purchasing $85 billion worth of long-term assets each month in an effort to bring down Treasury bond and mortgage rates so that banks will invest in things besides T-bonds and mortgages. This policy has been controversial to say the least, and today Ben Bernanke is delivering congressional testimony for the second day in a row, this time before the Senate Banking Committee, sharing his thoughts on the economy and what the Federal Reserve is doing.

Yesterday, Bernanke reiterated his belief that the economy is steadily improving and that the Federal Reserve could begin tapering its asset purchases by the end of the year but likely won't until mid-2014. Today Bernanke did not have a prepared statement and simply took questions from committee members. There wasn't much news; one member of the committee likened Bernanke's testimony to day-old coffee. Bernanke again emphasized that the Federal Reserve will continue its accommodative policies so long as necessary to reach the Federal Reserve's targets of 6.5% unemployment and 2% to 2.5% inflation.

Today's Dow leader
Today's Dow leader is UnitedHealth (NYSE:UNH), up 6.4%. UnitedHealth reported that its earnings rose by 8% to $1.40 per share, beating analyst expectations of $1.25 per share. Revenue rose 12% to $30.41 billion, slightly below analysts' estimates of $40.52 billion. The large rise in revenue and earnings owed to the addition of 3.2 million new members in the quarter. UnitedHealth also upped its full-year guidance for the year to $5.35 to $5.50 per share from its previous guidance of $5.25 to $5.50 per share.