Wal-Mart (NYSE:WMT) is the largest private employer in the world. More people receive a paycheck from the company than live in Latvia, Qatar, Slovenia, or 96 other countries.

Wal-Mart has gotten as big as it has -- it will likely do half a trillion in sales this year -- because it's very efficient at what it does. Part of that efficiency means keeping wages low. According to market research group IBSWorld, the average Wal-Mart sales associate earns $8.81 per hour.

The heat over Wal-Mart's low wages turned up this month when Washington D.C.'s city council passed a bill requiring all new stores of at least 75,000 square feet and $1 billion in annual revenue to pay a "superminimum" wage of $12.50 per hour, up from the city's standard $8.25 per-hour minimum wage. Existing employers are exempt for four years. Wal-Mart currently has no stores within D.C. city limits, so the bill effectively forces any D.C.-based Wal-Mart stores built in the next four years to pay a minimum wage 50% above its competitors.

Wal-Mart, which had plans to open six stores in D.C., balked. "We will not pursue Skyland, Capitol Gateway and New York Avenue and will start to review the financial and legal implications on the three stores already under construction," spokesman Steven Restivo said. "This was a difficult decision for us -- and unfortunate news for most D.C. residents -- but the Council has forced our hand."

Now the awkward moment: D.C.'s city council proposed the bill to help provide its residents with a living wage. But Wal-Mart -- which said its six planned D.C. stores could have created 1,800 jobs -- will now be providing no wages to D.C. residents.

We still don't know how this story will end. Wal-Mart could change its mind, or Mayor Vincent Gray could veto the bill. But this seems like a good time to discuss the merits of the minimum wage.

There are two sides to the minimum-wage debate. One says it prices low-skill workers out of the jobs market. That's what Econ 101 tells us should happen, and it explains Wal-Mart's experience in D.C.

The other side says these stories are anecdotal, that there's little evidence of employment falling when minimum wages are increased. Wal-Mart very likely can pay a $12.50 minimum wage while covering its cost of capital, and retailers like Costco (NASDAQ:COST) have shown that marginally higher wages can pay for themselves through lower employee turnover.

Each side has evidence to back up its arguments.

Economists Alan Krueger of Princeton and David Card of U.C. Berkeley looked at minimum-wage hikes in California in 1988 and New Jersey in 1992, and compared them to regions that didn't raise wages. The pair found that "increases in the minimum wage lead to increases in pay, but no loss in jobs."

Two economists from the London School of Economics looked at different data and used a different statistical technique to show that, indeed, raising the minimum wage does reduce employment, particularly among teenagers.

Andrajit Dube, then at U.C. Berkeley, looked at yet another set of data and found "strong earnings effects and no employment effects of minimum wage increases."

Bottom line: It's a more complicated issue than we make it out to be.

Here's what we do know. Adjusted for inflation, the federal minimum wage (currently $7.25 per hour) has declined sharply over the last forty years: 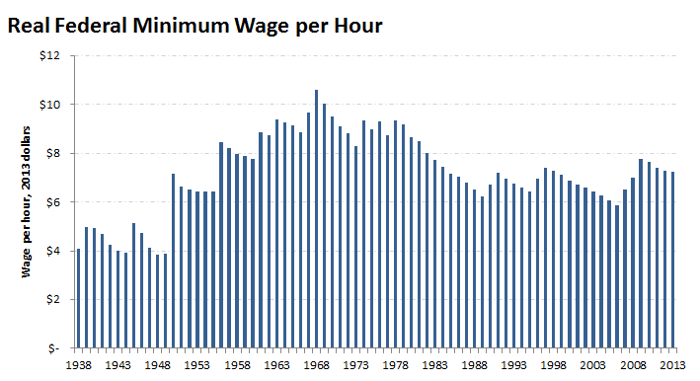 But the problem with a chart like this is that it masks differences in cost of living throughout the country. Some states and cities have their own minimum wages, but differences in pay are often swallowed by differences in costs. The Bureau of Labor Statistics' Cost of Living Index shows that it costs an average of 87% more to live in Honolulu than it does Cedar City, Utah, but minimum wages in the two cities are the same. Whether a worker finds a wage "fair," or how likely he or she is to find a minimum wage worth working for, varies wildly by location.

In the end, the problem with economists looking at the minimum-wage debate is that the issue is far more political than it is economic. And alas, politics being what they are, there are few agreements, and the only constants are frustration and disagreement.