The Motley Fool's CAPS system grades stocks based on many factors, but the most important ingredient is their ratings from common investors like you and me. A stock with a perfect five stars out of five is likely to have plenty of investor love behind it, combined with reasonable valuations. This magic formula helps CAPS players keep tabs on their favorite stocks, crowd-sourcing insight and wisdom from Fools on the street. It's one way for Fools to moneyball their portfolios.

Twenty-four of the 30 stocks in the Dow Jones Industrial Average (DJINDICES:^DJI) enjoy above-average CAPS scores of four stars or more. That's reasonable, because the Dow is meant to represent the best and brightest of American business. Moreover, an astounding 29 out of 30 tickers enjoy thumbs-up CAPScalls from more than 87% of all CAPS players who have rated them.

So who's the odd Dow stock out? That would be home improvement retailer Home Depot (NYSE:HD), with a three-star grade and an approval rating of just 79%.

Home Depot's unloved status might come as a surprise. After all, Home Depot shares have soundly beaten their Dow peers over the last year with a massive 60% dividend-adjusted gain. That's the fourth-largest 52-week boost on the index, behind three high-profile turnaround stories.

Zoom out to a five-year perspective, and Home Depot becomes the Dow stock to beat with a 288% gain. That's miles ahead of second-strongest performer UnitedHealth Group (NYSE:UNH), which wasn't even a Dow member when its 182% run started.

As it turns out, that strong share-price gain is one of the main reasons why CAPS players don't love Home Depot right now. Four of the last five bearish CAPScalls on this stock that offer an explanation fall back on overvalued shares.

"[Too] fast of a run up based on speculation of housing recovery," says all-star CAPS player dcarrithers. Another all-star known as alphadogg keeps it short and sweet: "overvalued." CMPSvictor concedes that Home Depot is a "solid firm with enduring competitive advantages," but still gives the stock a thumbs-down rating due to overheated share prices.

For what it's worth, home improvement rival Lowe's (NYSE:LOW) enjoys about the same P/E ratio as Home Depot. But its CAPS score adds a fourth star, and 88% of CAPS players with an opinion like that stock today. The home improvement retail sector doesn't seem to be out of favor with CAPS players. 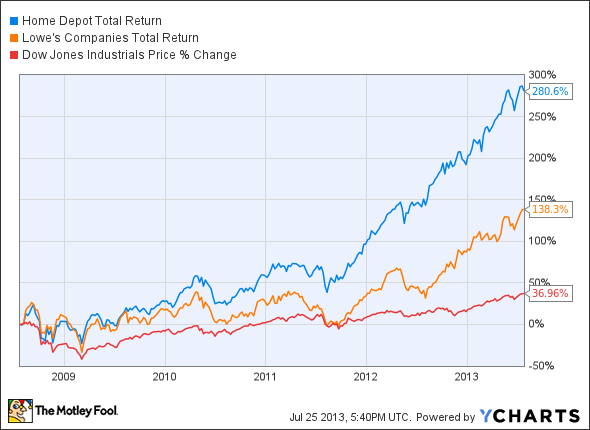 It seems obvious, then, that many CAPS players give Home Depot a thumbs-down score for reasons not related to valuation or sector strength. Home Depot does fail several of the health checks that fellow Fool Alex Planes recently put it through, including important ones like strong cash flows and reasonable debt-to-equity trends.