After spending $19 billion to buy a couple of oil and gas companies, Freeport-McMoRan (NYSE:FCX) is understandably exhausted. In fact, the company has so exhausted its financial resources that it's looking to cut back its spending and is even planning to make a return or two. It hasn't helped matters that the company's profits have been pinched by low commodity costs, which is forcing Freeport to take a break from its free-spending ways.

Freeport currently has about $20.5 billion in total debt, which it's planning to reduce to $12 billion over the next three years. To get there, the company decided that it needed to be a bit more aggressive, in light of the fact that two of the top commodities it produces, copper and gold, fell in price and reduced its earnings. The company's plan now is to cut about $1.9 billion in capital cost reductions and project deferrals, as well as look to sell some of its assets. 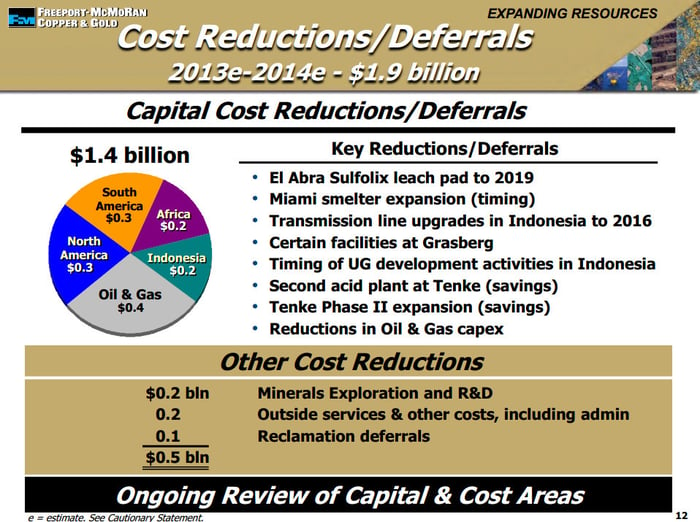 What's most interesting to me is the planned capex reductions at its newly acquired oil and gas business as well as the asset it's planning to sell. Among the newly acquired assets is a solid position in the hot Eagle Ford Shale. While most of its peers are investing heavily in the play, Freeport will actually be pulling back on its capital. According to James Flores, the president of the oil and gas division, the company will be reducing its rig count to transition the asset to a focus on cash flow instead of growth.

This is a pretty radical change when you look at the numbers. Freeport is reducing its capex in the Eagle Ford by 20% which will shift the asset from one that was on pace to deliver 15% production growth to one that will actually decline 20%. However, in doing so the company will see a $600 million swing in cash flow.

Competitors like EOG Resources (NYSE:EOG), for example, are instead relying on the Eagle Ford to deliver growth. In fact, much of EOG's 28% goal for production growth this year will be fueled by its Eagle Ford operations. The company is drilling 425 wells in the play this year and expects to continue at that pace for the next dozen years. What's different here is that in addition to the cash crunch, Freeport sees better growth opportunities elsewhere, as it has a strong position in the Gulf of Mexico, which EOG doesn't have.

Speaking of the Gulf, Freeport is actually looking to sell some of its lower-growth assets in the region in an effort to pay down its debt. In fact, according to CEO Richard Adkerson, the company has already initiated plans to sell some of its conventional oil and gas production on the shelf of the Gulf of Mexico. This move would follow on the heels of Apache's (NASDAQ:APA), which recently announced a move to exit the Gulf's shelf.

Apache was able to get $3.75 billion for its shelf properties, while also keeping 50% of the upside of all the exploration blocks. That deal was a very good one for Apache because it was able to monetize a mature asset while also keeping some of the upside. The company is planning on using half of those proceeds on its own plan to pay down its debt. A similarly structured deal by Freeport would be welcomed news.

In addition to selling some of its shallower Gulf of Mexico assets, Freeport is looking at other recently acquired oil and gas assets with which to part ways. The company's Madden natural gas assets in Wyoming, for example, could be one of the assets on the chopping block. Before Freeport bought Plains Exploration & Production, the plan had been to unload this non-operated natural gas asset. Freeport, which now holds the 14% interest in the gas field and an associated gas plant, could follow through on Plains' original plans and sell these assets. Madden is just one of Freeport's many options.

While Freeport has exhausted its financial resources at the moment, there is no rest for the weary -- the company now needs to focus on shedding assets to go along with its cost reductions. With $1.9 billion in cost reductions already announced, Freeport has a nice head start. However, if commodity prices take a dive, the company might have to be even more aggressive in its approach. In the meantime, it's going to take advantage of high oil prices to sell some oil assets in the Gulf as well as milk the Eagle Ford for its oily cash flow.