As each week goes by, the situation at Dell (NASDAQ:DELL.DL) looks more and more like a repeat of the Titanic. There's an iceberg ahead, but nobody seems capable of doing anything about it. As Michael Dell and Carl Icahn struggle for control of this once-great company, ordinary shareholders' interests are increasingly being left by the wayside. As a result, Dell stock has been slowly losing altitude. 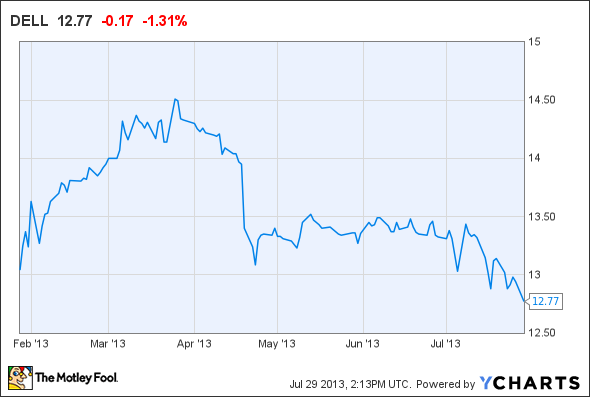 It would be wrong to say there's no hope of a successful buyout. The original offer made by Michael Dell and Silver Lake -- to buy the company for $13.65 a share -- is still on the table. Moreover, the two parties have offered to raise their bid to $13.75 per share, if the special committee overseeing the proposed transaction agrees to change the voting rules to exclude non-votes, rather than counting them as "no" votes.

Unfortunately, the original proposal does not seem to have enough shareholder support to go through, while the revised proposal is unlikely to make it to a vote, as the special committee is worried that it will seem unfair to change the rules. Yet the "fair" result is likely to be the worst one for shareholders: a stalemate that prevents any "value-unlocking" activity and leads to a big decline in Dell stock.

As a result, Dell and Silver Lake offered to raise their bid from their previous "best and final offer" of $13.65 to $13.75, as long as the special committee overseeing the process agrees to change the voting rules so that non-votes are excluded (i.e., counted as abstentions). Both the price increase and the proposed rule change were intended to smooth the way for Dell to go private. The vote was then rescheduled for this Friday.

Not surprisingly, Carl Icahn of Icahn Enterprises (NASDAQ:IEP) and his supporters -- who have vehemently opposed the Dell buyout for months -- are loudly protesting the proposed rule change. (After all, it would presumably end their hopes of gaining control of Dell.) Pressure from shareholders who oppose the buyout will make it difficult or impossible for the Dell special committee to change the voting rules, even if it would make sense to do so.

Plenty of downside
While Icahn and his group believe that Dell could increase shareholder value by changing Dell's capital structure, it's hard to imagine a scenario where Icahn would be able to carry out those plans. Michael Dell has no intention of leaving the company if the go-private transaction fails.

Moreover, while Icahn's group may have enough votes to sink the go-private transaction, it is highly unlikely that they have enough votes to take control of the board. Michael Dell cannot vote on the go-private deal because of his conflict of interest, but if the deal falls through, his 16% ownership stake in the company will come back into play. Since he will certainly vote against Icahn's proposed board, Icahn will have to get far more than 50% of the "unaffiliated" stockholders to support his proposal. Given that the vote totals have reportedly been very close to 50-50 so far, Icahn seems certain to fall short.

Unfortunately, that would leave Dell in "status quo" mode. With analysts expecting adjusted EPS to plummet to $1 this year (from $1.72 last year) due to PC market weakness and margin compression, the status quo is not something Dell shareholders should look forward to. The Dell special committee estimated early this month that Dell's stock could trade between $5.85 and $8.67 if the buyout fails.

Bad situation
Dell shareholders have no good options right now. The ongoing battle between Carl Icahn and Michael Dell is turning ordinary investors into collateral damage. Neither Icahn nor Dell appears to have enough votes to enact their preferred scenario. However, both sides have dug in and so neither is likely to give up and sell to the other. Right now, Dell (the company) needs leadership and stability, yet the proxy battle is causing chaos. At the end of the day, Dell's competitors are likely to be the only ones who are happy.